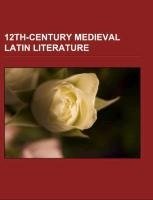 Source: Wikipedia. Pages: 33. Chapters: Acta sanctorum in Selio, Alexandreis, Angers Fragment, Antiocheis, Apocalypse of Golias, Architrenius, Carmen de Prodicione Guenonis, Chronica Slavorum, Chronicon Lethrense, Chronicon Roskildense, Cosmographia (Bernard Silvestris), Cum universi, Decretum Gratiani, De amore (Andreas Capellanus), De bello Troiano, De expugnatione Lyxbonensi, De instructione principis, De nugis curialium, De Sanctimoniali de Wattun, Dictionarius (Johannes de Garlandia), Gesta Francorum, Gesta Herewardi, Historia belli sacri, Historia Calamitatum, Historia Caroli Magni, Historia Norwegiæ, Historia Regum Britanniae, Historia Roderici, Historia scholastica, Jordan Fantosme, Liber ad honorem Augusti, Linquo coax ranis, Moralium dogma philosophorum, Post Miserabile, Prophecy of Merlin, Prophetiae Merlini, Sentences, Sic et Non, Tractatus de Purgatorio Sancti Patricii, Visio Godeschalci, Visio Tnugdali, Vita Merlini, Vita Sancti Niniani, Ysengrimus. Excerpt: The Historia Regum Britanniae (English: The History of the Kings of Britain) is a pseudohistorical account of British history, written c. 1136 by Geoffrey of Monmouth. It chronicles the lives of the kings of the Britons in a chronological narrative spanning a time of two thousand years, beginning with the Trojans founding the British nation and continuing until the Anglo-Saxons assumed control of much of Britain around the 7th century. It is one of the central pieces of the Matter of Britain. Although credited uncritically well into the 16th century, since the 17th century it has been credited with little value as history - when events described, such as Julius Caesar's invasions of Britain, can be corroborated from contemporary histories, Geoffrey's account can be seen to be wildly inaccurate - but it remains a valuable piece of medieval literature, which contains the earliest known version of the story of King Lear and his three daughters, and introduced non-Welsh-speakers to the legend of King Arthur. Geoffrey starts the book with a statement of his purpose in writing the history: "I have not been able to discover anything at all on the kings who lived here before the Incarnation of Christ, or indeed about Arthur and all the others who followed on after the Incarnation. Yet the deeds of these men were such that they deserve to be praised for all time." He claims that he was given a source for this period by Archdeacon Walter of Oxford, who presented him with a "certain very ancient book written in the British language" from which he has translated his history. He also cites Gildas and Bede as sources. Then follows a dedication to Robert, earl of Gloucester and Waleran, count of Meulan, whom he enjoins to use their knowledge and wisdom to improve his tale. The Historia itself begins with the Trojan Aeneas, who according to Roman legend settled in Italy after the Trojan War. His great-grandson Brutus is banished, and, after a period of wandering, is directed by the