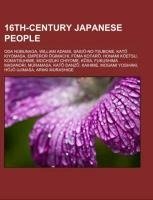 Source: Wikipedia. Pages: 30. Chapters: Oda Nobunaga, William Adams, Saigo-no-Tsubone, Kato Kiyomasa, Emperor Ogimachi, Fuma Kotaro, Honami Koetsu, Komatsuhime, Mochizuki Chiyome, Kosa, Fukushima Masanori, Muramasa, Kato Danzo, Kaihime, Mogami Yoshiaki, Hojo Ujimasa, Araki Murashige, Hikita Bungoro, Suzuki Magoichi, Giovanni Niccolo, Igawa Mitsunobu, Jinbo Nagamoto, Karasawa Genba, Iwasa Matabei, Nagao Fujikage, Suzuki Shigeoki, Suzuki Magoroku. Excerpt: William Adams (September 24, 1564 - May 16, 1620), also known in Japanese as Anjin-sama (anjin, "pilot"; sama, a Japanese honorific) and Miura Anjin (¿¿¿¿: "the pilot of Miura"), was an English navigator who travelled to Japan and is believed to be the first Englishman ever to reach that country. He was the inspiration for the character of John Blackthorne in James Clavell's bestselling novel Shogun. Soon after Adams' arrival in Japan, he became a key advisor to the shogun Tokugawa Ieyasu and built for him Japan's first Western-style ships. Adams was later the key player in the establishment of trading factories by the Netherlands and England. He was also highly involved in Japan's Red Seal Asian trade, chartering and captaining several ships to Southeast Asia. He died in Japan at age 55, and has been recognized as one of the most influential foreigners in Japan during this period. Adams was born in Gillingham, Kent, England. After losing his father at the age of twelve, he was apprenticed to shipyard owner Master Nicholas Diggins at Limehouse for the seafaring life. He spent the next twelve years learning shipbuilding, astronomy, and navigation before entering the Royal Navy. Adams served in the Royal Navy under Sir Francis Drake and saw naval service against the Spanish Armada in 1588 as master of the Richarde Dyffylde, a resupply ship. Adams then became a pilot for the Barbary Company. During this service, according to Jesuit sources, he took part in an expedition to the Arctic that lasted about two years, in search of a Northeast Passage along the coast of Siberia to the Far East. ...I am a Kentish man, born in a town called Gillingham, two English miles from Rochester, one mile from Chatham, where the King's ships do lie: from the age of twelve years old, I was brought up in Limehouse near London, being Apprentice twelve years to Master Nicholas Diggins; and myself have served for Master and Pilot in her Majesty's ships; and about eleven or twelve years have serv