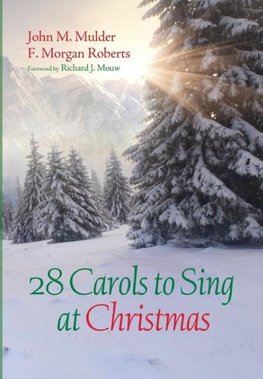 28 Carols to Sing at Christmas

It wouldn't be Christmas without Christmas carols.

Virtually every Christian--and many non-Christians--would agree. The songs of Christmas can be heard from all kinds of media and all across the world in many languages. Christmas... Viac o knihe

It wouldn't be Christmas without Christmas carols.

Virtually every Christian--and many non-Christians--would agree. The songs of Christmas can be heard from all kinds of media and all across the world in many languages. Christmas has become the biggest holiday in the United States and in virtually every land where Christianity has a significant influence.

But what does it all mean? What is the enduring message of these Christmas carols? Why do they awaken the mind, move the heart, and inspire the Christlike behavior proclaimed by Jesus, born in Bethlehem? 28 Carols to Sing at Christmas answers those questions.

Each carol's history is described by John M. Mulder, and F. Morgan Roberts meditates on its contemporary meaning. The result is a devotional resource that will make your Christmas a spiritual discovery. Here is a book to bring meaning to the mystery of Christ's birth and a message for all the world.


""Twenty-eight carols. The most profound and beautiful ever composed. The melodies flow from your heart and the words touch your soul. To sing them is to love them. Now read this book, carol by carol. Learn how each one came to be. Find out who wrote them and under what circumstances. Meditate on them with the help of authors Mulder and Roberts. This book is a gift, one that makes the gift of these carols even more precious.""
--Craig Dykstra, Former Senior Vice President, Religion, Lilly Endowment, Inc.

""I cannot imagine a better Christmas devotional resource than this little book. John Mulder and Morgan Roberts have deepened our appreciation for these beautiful Christmas carols by revealing their origins and reflecting on what they mean for our faith. Because of their insights, we will sing at Christmas with even more wonder and joy.""
--Thomas G. Long, Bandy Professor of Preaching, Emeritus, Candler School of Theology

""Insight and inspiration--the authors' aim for this engaging collection--is magnificently realized in the texts, tunes, background, and reflection for the seasons of Advent and Christmas. The writing is at once pastoral, personal, practical, and, yes, profound. Whether reflecting on the simplest text or the doctrine of the incarnation, Mulder and Roberts uncover insights that feed mind and soul. This is a go-to volume that you will value for a lifetime.""
--Morgan Simmons, Retired Church Musician and Hymnologist

John M. Mulder is the former President of Louisville Presbyterian Theological Seminary and has taught the history of Christianity for decades. An award-winning author, he has published more than 25 books, including Finding God: A Treasury of Conversion Stories and (with F. Morgan Roberts) 28 Hymns to Sing Before You Die.

F. Morgan Roberts is Pastor Emeritus of the Shadyside Presbyterian Church in Pittsburgh. A widely-known preacher and pastor, he has served churches in Alabama, Kentucky, Michigan, and Ohio. He is the author of several publications, including Are There Horses in Heaven? and (with John M. Mulder) 28 Hymns to Sing Before You Die.