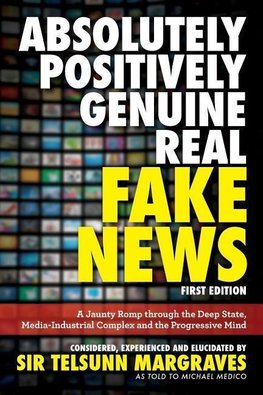 Fake News is actually a wonderful thing in that it allows for so many appealing possibilities to consider. All fake news needs to have is some element of truth in order for it to reverberate with viewers, readers or consumers of news through any source.... Viac o knihe

Fake News is actually a wonderful thing in that it allows for so many appealing possibilities to consider. All fake news needs to have is some element of truth in order for it to reverberate with viewers, readers or consumers of news through any source. For example, there is a James Comey, he is a former director of the FBI; there is a Justice Ruth Bader Ginsburg, she is a current justice of the United States Supreme Court; both persons work out of Washington, DC; sexual harassment exists and used Hummers are sold via classified ads all the time. That seems pretty ordinary when considered as separate items, but when you combine them in a single news item you get "Former FBI Director Comey Accuses Justice Ruth Bader Ginsburg of Sexual Harassment!" See…simple, quick, easy, hard-to-prove and hard-to disprove and the prospect that it could be true makes the possibility even more fascinating. Another item of keen interest in "Absolutely…Positively…Genuine…Real Fake News" is the presser held when the Clooney's and their family came back to the US. They were here to announce the opening of the "George and Amal Clooney Beverly Hills Muslim Outreach Center." The author uses this opportunity to write about his ruminations so that the reader may consider his experiences as their view into a world reserved for the privileged few. Another favorite APGR Fake News feature is when "Chelsea Handler Launches the "I Hate Trump Fan Club" and a stellar event it was. The Club's Advisory Board is comprised of so many women who have so little regard for the President that it makes for an excellent example into what Americans call a study in cohesive and collective thought. There are so many possibilities in fake newsworthy events that the mind boggles. You need not go any further than when "North Korean Supreme Leader Kim Jong Un Weds actress Madeleine LeBeau" or HBO's John Oliver as he taped his soon-to-be-released documentary "The Snowflake Lounge", or Bill Nye "The Science Guy Blames Man-made Global Warming for Drastic Drop of UFO Sightings" plus more than 36 articles, interviews, blog posts, features all written to titillate, illuminate and fascinate the reader. It all culminates in the First Annual "Fake News Awards" where honors are bestowed on the men and women who make fake news what it is! "Absolutely, Positively, Genuine, Real Fake News" is written as a tribute to America; a marvel to the fact that even when the media reports fake news they do it in a truly magnificent way. The mainstream of news networks, entertainment venues, online blogs, prestigious newspapers and other media have turned a beautifully blind eye toward the curiosity for truth that had been their hallmark. Now it seems that a uniformity of common purpose guides so much of what is thought, written, reported and accepted by the fifth estate. Whether there is a story about "The Trump Limbaugh Barbeque" or destroyed emails or some Russian collusion, real or imagined, sourced or unsourced, founded or unfounded, that does not deter the ever powerful cannons of the Mainstream Media from using the American news consumers as fodder…truly magnificent!

Man in the Brown Suit

Lone Wolf and Cub 13 : The Moon in East the Sun in West

Notes for a War Story

Klezmer: Book One: Tales of the Wild East

Lone Wolf and Cub 9: Echo of the Assassin 9