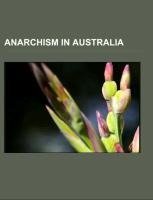 Source: Wikipedia. Pages: 33. Chapters: Australian anarchists, Lola Ridge, David Andrade, Germaine Greer, Arthur Desmond, Peter McGregor, Joseph Toscano, Chummy Fleming, Harry Hooton, Isaac Steinberg, Montague Miller, Willem Siebenhaar, William Lane, John Kinsella, Richard Sylvan, Julie McCrossin, John Flaus, Australian Anarchist Centenary Celebrations, Pi O, John Arthur Andrews, Michael Matteson, John Zube, Jas H. Duke, Iain McIntyre. Excerpt: Germaine Greer (born 29 January 1939) is an Australian writer, academic, journalist and scholar of early modern English literature, widely regarded as one of the most significant feminist voices of the later 20th century. Greer's ideas have created controversy ever since her book The Female Eunuch became an international best-seller in 1970, turning her into a household name and bringing her both adulation and opposition. She is also the author of many other books including, Sex and Destiny: The Politics of Human Fertility (1984); The Change: Women, Ageing and the Menopause (1991) and Shakespeare's Wife (2007). She is Professor Emeritus of English Literature and Comparative Studies at the University of Warwick. Greer has defined her goal as 'women's liberation' as distinct from 'equality with men', She asserts that women's liberation meant embracing gender differences in a positive fashion, a struggle for the freedom for women to define their own values, order their own priorities and determine their own fates. In contrast, Greer sees equality as mere assimilation and "settling" to live the lives of "unfree men". Germaine Greer was born in Melbourne in 1939, growing up in the bayside suburb of Mentone. Her father was a newspaper advertising rep' who served in the wartime RAAF. After attending a private convent school, Star of the Sea College, in Gardenvale, she won a teaching scholarship in 1956 and enrolled at the University of Melbourne. After graduating with a degree in English and French language and literature, she moved to Sydney, where she became involved with the Sydney Push social milieu and the anarchist Sydney Libertarians at its centre. Christine Wallace, in her unauthorised biography, describes Greer at this time: For Germaine, provided a philosophy to underpin the attitude and lifestyle she had already acquired in Melbourne. She walked into the Royal George Hotel, into the throng talking themselves hoarse in a room stinking of stale beer and thick with