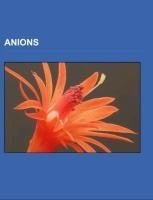 Source: Wikipedia. Pages: 46. Chapters: Acetylide, Acid radical, Alkalide, Antimonide, Arsenide, Bifluoride, Bismuthide, Bisulfide, Borohydride, Bromide, Carbanion, Carbide, Carbonite (polyatomic ion), Chloride, Cyanide, Disulfide, Electride, Ferricyanide, Ferrocyanide, Hydrogen anion, Hypothiocyanite, Keggin structure, Lyate ion, Metallate, Nitride, Nonaflate, Oxide, Ozonide, Peroxide, Phosphide, Plumbide, Polyiodide, Potassium hexacyanochromate(III), Pyrophosphate, Selenide, Silicide, Stannide, Superoxide, Telluride (chemistry), Thiocyanate, Thiophosphate, Triiodide. Excerpt: A peroxide is a compound containing an oxygen-oxygen single bond or the peroxide anion (). The O-O group is called the peroxide group or peroxo group. In contrast to oxide ions, the oxygen atoms in the peroxide ion have an oxidation state of -1. The simplest stable peroxide is hydrogen peroxide. Superoxides, dioxygenyls, ozones and ozonides compound are considered separately. Peroxide compounds can be roughly classified into organic and inorganic. Whereas the inorganic peroxides have an ionic, salt-like character, the organic peroxides are dominated by the covalent bonds. The oxygen-oxygen chemical bond of peroxide is unstable and easily split into reactive radicals via homolytic cleavage. For this reason, peroxides are found in nature only in small quantities, in water, atmosphere, plants, and animals. Peroxide ion formation has recently been highlighted as one of the main mechanisms by which oxides accommodate excess oxygen in ionic crystals and may have a large impact on a range of industrial applications including solid oxide fuel cells. Peroxides have a bleaching effect on organic substances and therefore are added to some detergents and hair colorants. Other large-scale applications include medicine and chemical industry, where peroxides are used in various synthesis reactions or occur as intermediate products. With an annual production of over 2 million tonnes, hydrogen peroxide is the most economically important peroxide. Many peroxides are unstable and hazardous substances; they cannot be stored and therefore are synthesized in situ and used immediately. AscaridolePeroxides are usually very reactive and thus occur in nature only in a few forms. These include, in addition to hydrogen peroxide, a few vegetable products such as ascaridole and a peroxide derivative of prostaglandin. Hydrogen peroxide occurs in surface water, groundwater and in the atmosphere. It forms upon illumination or natural catalytic action by substances containing in water. Sea water con