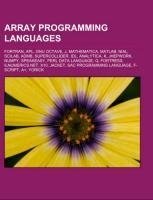 Source: Wikipedia. Pages: 51. Chapters: Fortran, APL, GNU Octave, J, Mathematica, MATLAB, Nial, Scilab, ADMB, SuperCollider, IDL, Analytica, K, JHepWork, NumPy, Speakeasy, Perl Data Language, Q, Fortress, ILNumerics.Net, X10, Jacket, SAC programming language, F-Script, A+, Yorick, FuncDesigner, ZPL, FreeMat, IMTEK Mathematica Supplement, S-Lang, Genius, Sysquake, Chapel, JLab, Rlab, JMathLib, O-Matrix, NGL, NESL, APLX, COMSOL Script, MEX file, LYaPAS, FISh. Excerpt: Fortran is a general-purpose, procedural, imperative programming language that is especially suited to numeric computation and scientific computing. Originally developed by IBM at their campus in south San Jose, California in the 1950s for scientific and engineering applications, Fortran came to dominate this area of programming early on and has been in continual use for over half a century in computationally intensive areas such as numerical weather prediction, finite element analysis, computational fluid dynamics, computational physics and computational chemistry. It is one of the most popular languages in the area of high-performance computing and is the language used for programs that benchmark and rank the world's fastest supercomputers. Fortran (a blend derived from The IBM Mathematical Formula Translating System) encompasses a lineage of versions, each of which evolved to add extensions to the language while usually retaining compatibility with previous versions. Successive versions have added support for processing of character-based data (FORTRAN 77), array programming, modular programming and object-oriented programming (Fortran 90 / 95), and object-oriented and generic programming (Fortran 2003). The names of earlier versions of the language through FORTRAN 77 were conventionally spelled in all-caps (FORTRAN 77 was the version in which the use of lowercase letters in keywords was strictly nonstandard). The capitalization has been dropped in referring to newer versions beginning with Fortran 90. The official language standards now refer to the language as "Fortran". Because the capitalization was never completely consistent in actual usage, this article adopts the convention of using the all-caps FORTRAN in referring to versions of FORTRAN through FORTRAN 77 and the title-caps Fortran in referring to versions of Fortran from Fortran 90 onward. This convention is reflected in the capitalization of FORTRAN in the ANSI X3.9-1966 (FORTRAN 66) and ANSI X3.9-197