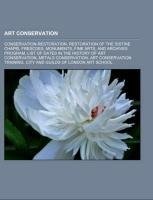 Source: Wikipedia. Pages: 40. Chapters: Conservation-restoration, Restoration of the Sistine Chapel frescoes, Monuments, Fine Arts, and Archives program, List of dates in the history of art conservation, Metals conservation, Art conservation training, City and Guilds of London Art School, Getty Conservation Institute, Opificio delle pietre dure, Heritage Science, Digital Preservation Coalition, Intermuseum Conservation Association, List of meeting locations of the Midwest Regional Conservation Guild, List of conservation organizations, Art restoration, ArtWatch International, American Institute for Conservation, Public Monuments and Sculpture Association, Hamilton Kerr Institute, Cyclododecane, Conservator, Thesaurus florentinus, Istituto Superiore per la Conservazione ed il Restauro, Painting restoration, Conservation science, Institute of Conservation, The Niland Collection, Cups 'n Strings. Excerpt: The restoration of the frescoes of the Sistine Chapel was one of the most significant art restorations of the 20th century. The Sistine Chapel was built by Pope Sixtus IV within the Vatican immediately to the north of St. Peter's Basilica and completed in about 1481. Its walls were decorated by a number of Renaissance painters who were among the most highly-regarded artists of late 15th century Italy, including Ghirlandaio, Perugino, and Botticelli. The Chapel was further enhanced under Pope Julius II by the painting of the ceiling by Michelangelo between 1508 and 1512 and by the painting of the Last Judgment, commissioned by Pope Clement VII and completed in 1541, again by Michelangelo. The tapestries on the lowest tier, today best known from the Raphael Cartoons (painted designs) of 1515-16, completed the ensemble. Together the paintings make up the greatest pictorial scheme of the Renaissance. Individually, some of Michelangelo's paintings on the ceiling are among the most notable works of western art ever created. The frescoes of the Sistine Chapel and in particular the ceiling and accompanying lunettes by Michelangelo have been subject to a number of restorations, the most recent taking place between 1980 and 1994. This most recent restoration had a profound effect on art lovers and historians, as colours and details that had not been seen for centuries were revealed. It has been claimed that as a result "Every book on Michelangelo will have to be rewritten". Others, such as the art historian James Beck of ArtWatch International, have been extremely critical of the restoration, saying that the restorers have not realised the true intentions of the artist. This is the subject of continuing debate. The frescoes on the ceiling of the Sistine Chapel had a number of interventions prior to the restoration process which was started in 1980. Initial problems with the ceiling appear to have been caused by water penetrating through the floor above. In about 1547 Paolo Gi