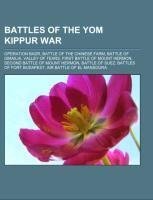 Battles of the Yom Kippur War

Source: Wikipedia. Pages: 56. Chapters: Operation Badr, Battle of the Chinese Farm, Battle of Ismailia, Valley of Tears, First Battle of Mount Hermon, Second Battle of Mount Hermon, Battle of Suez, Battles of Fort Budapest, Air Battle of El Mansoura, 1973 Syrian General Staff Headquarters Raid, Third Battle of Mount Hermon, Battle of Fort Lahtzanit, Ofira Air Battle, Battle of the Sinai, Operation Doogman 5, Operation Tagar. Excerpt: Operation Badr (Arabic: ¿; ¿Amaliyat Badr) or Plan Badr (¿¿¿ ¿¿¿; Khitat Badr) was the code name for the Egyptian military operation to cross the Suez Canal and seize the Bar-Lev Line of Israeli fortifications on October 6, 1973. Launched in conjunction with a Syrian assault on the Golan Heights, this attack marked the start of the Yom Kippur War. Operation Badr was preceded by training exercises starting in 1968, operational planning from 1971 onwards and a deception operation. In the opening stages of the attack, known as The Crossing (¿¿¿¿¿¿; al-'obour), combat engineers used water cannons to rapidly clear numerous passages through the sand wall lining the east bank of the canal, laid bridges and operated ferries, allowing armor to cross. Egyptian infantry assaulted the Bar-Lev fortifications and were counterattacked by Israeli armor and infantry. The attack surprised the Israelis, and by October 7 the crossing was complete, and the east bank of the canal was occupied by five Egyptian infantry divisions. The infantry proceeded to establish defensive positions in bridgeheads spanning the 160 kilometres (99 mi) front. Following a lull in the fighting on October 7, Israeli armor reserves arrived at the front and launched a counterattack opposite the city of Ismailia. The Egyptian forces were successful in employing anti-tank weapons to repel the Israeli armor and advanced once more. By the end of October 8, Egypt had occupied a strip of territory along the entire east bank of the canal to a depth of approximately 15 kilometres (9.3 mi). In addition to the canal crossing, Egypt laid a successful naval blockade against Israel in the Red Sea and Mediterranean Sea. At the end of the Six Day War, Israel held the entire Sinai peninsula, with the exception of Port Fouad. Israel's victory in the Six Day War brought about a sense of security within Israel; the occupied territory added strategic depth to the country's defense. Consequently, Israel ignored United Nations Secur