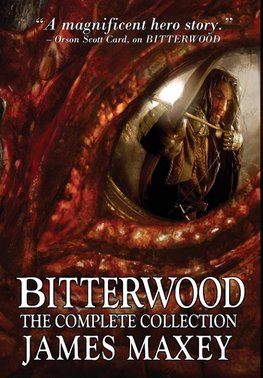 An epic tale of war between dragons and mankind! When the mysterious dragon slayer Bitterwood murders the son of the Dragon-King, the dragons respond with a campaign of genocide against their human slaves. Amid the chaos of war, a band of rebel humans risk... Viac o knihe

An epic tale of war between dragons and mankind! When the mysterious dragon slayer Bitterwood murders the son of the Dragon-King, the dragons respond with a campaign of genocide against their human slaves. Amid the chaos of war, a band of rebel humans risk everything to fight for freedom, and an end to the Dragon Age. Read the saga that Orson Scott Card called "a magnificent hero story." Bitterwood, the Complete Collection gathers together the first four novels of the Bitterwood series, plus the prequel short story "Tornado of Sparks." This is everything written in the Bitterwood universe through 2017. It does not include new Bitterwood stories coming out in 2018 and 2019.
James Maxey is currently working on a new trilogy set in the Bitterwood universe called Dragonsgate, due to appear in 2019. A collection of novellas that follow the further adventures of characters from the Bitterwood series is now available as Dragonsgate: Preludes and Omens. The ISBN for that book is ISBN-13: 978-1727160628. These works are not part of Bitterwood: The Complete Collection.
The individual works:
Tornado of Sparks: The dragon Vendevorex demonstrates his magical powers for the dragon-king Albekizan in a test that orphans a human infant. Can Vendevorex reunite the child with her only remaining family?
Bitterwood: Dragons rule the world and humans serve as their slaves, pets, and prey, with only the mysterious dragon-slayer Bitterwood fighting the dominant dragons from the shadows. But when Bitterwood slays the beloved son of the dragon-king Albekizan, the dragons launch a war of extermination against all humans. Can mankind survive the combined might of the dragons?
Dragonforge: As a war spreads throughout the dragon kingdom, a band of human rebels take over the armory of the dragon armies, the legendary Dragon Forge. As the dragon armies mass to take back the fortress, Bitterwood finds himself in the fight of his life, facing off against the most dangerous dragon of all: Blasphet.
Dragonseed: With the dragon forces in disarray, the humans face their own woes as allies banded together to fight the dragons begin to take up arms against each other. With all of civilization on the verge of anarchy, can Bitterwood save the day by joining forces with his worst enemy-the sun-dragon Hex, the last surviving son of King Albekizan?
Dawn of Dragons: 1000 years before Bitterwood, a man named Alex Pure gets disemboweled by a dragon. It's the beginning of a beautiful friendship. Also, the apocalypse.


In praise of Bitterwood:
"For the sake of humanity, join in Bitterwood's revolt." - Kirkus Reviews
"A grabber from page one, a smart tale of adventure and revenge sprinkled with echoes of our own dangerous times. James Maxey's world of dragons and humans at war is so solidly and engagingly rendered that I never wanted to leave." - John Marco
"Bitterwood is an unlikely hero in a rich world, with a rich history that holds many surprises. James Maxey tells his story with a sure hand. Enjoy the journey!" - Carrie Vaughn
"Fine action and cool world building. Anne McCaffrey through a mirror darkly." - E. E. Knight
"A magnificent hero story." - Orson Scott Card
"James Maxey writes some of the best action scenes in the business." - Scott M. Roberts, Editor of Intergalactic Medicine Show

The Science Of Discworld II : The Globe