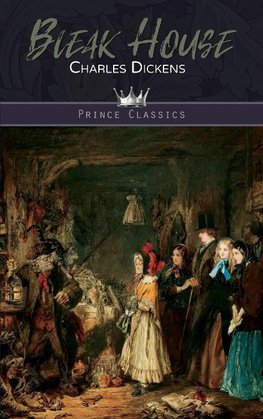 Sir Leicester Dedlock and his wife Honoria live on his estate at Chesney Wold. Unknown to Sir Leicester, before she married, Lady Dedlock had a lover, Captain Hawdon, and had a daughter by him. Lady Dedlock believes her daughter is dead.
The daughter,... Viac o knihe

Sir Leicester Dedlock and his wife Honoria live on his estate at Chesney Wold. Unknown to Sir Leicester, before she married, Lady Dedlock had a lover, Captain Hawdon, and had a daughter by him. Lady Dedlock believes her daughter is dead.
The daughter, Esther, is in fact alive and being raised by Miss Barbary, Lady Dedlock's sister. Esther does not know Miss Barbary is her aunt. After Miss Barbary dies, John Jarndyce becomes Esther's guardian and assigns the Chancery lawyer "Conversation" Kenge to take charge of her future. After attending school for six years, Esther moves in with him at Bleak House.
Jarndyce simultaneously assumes custody of two other wards, Richard Carstone and Ada Clare (who are both his and one another's distant cousins). They are beneficiaries in one of the wills at issue in Jarndyce and Jarndyce; their guardian is a beneficiary under another will, and the two wills conflict. Richard and Ada soon fall in love, but though Mr Jarndyce does not oppose the match, he stipulates that Richard must first choose a profession. Richard first tries a career in medicine, and Esther meets Allan Woodcourt, a physician, at the house of Richard's tutor. When Richard mentions the prospect of gaining from the resolution of Jarndyce and Jarndyce, John Jarndyce beseeches him never to put faith in what he calls "the family curse".
Meanwhile, Lady Dedlock is also a beneficiary under one of the wills. Early in the book, while listening to the reading of an affidavit by the family solicitor, Mr Tulkinghorn, she recognises the handwriting on the copy. The sight affects her so much she almost faints, which Tulkinghorn notices and investigates. He traces the copyist, a pauper known only as "Nemo", in London. Nemo has recently died, and the only person to identify him is a street-sweeper, a poor homeless boy named Jo, who lives in a particularly grim and poverty-stricken part of the city known as Tom-All-Alone's ("Nemo" is Latin for "nobody").
Lady Dedlock is also investigating, disguised as her maid, Mademoiselle Hortense. Lady Dedlock pays Jo to take her to Nemo's grave. Meanwhile, Tulkinghorn is concerned Lady Dedlock's secret could threaten the interests of Sir Leicester and watches her constantly, even enlisting her maid to spy on her. He also enlists Inspector Bucket to run Jo out of town, to eliminate any loose ends that might connect Nemo to the Dedlocks.
Esther sees Lady Dedlock at church and talks with her later at Chesney Wold - though neither woman recognises their connection. Later, Lady Dedlock does discover that Esther is her child. However, Esther has become sick (possibly with smallpox, since it severely disfigures her) after nursing the homeless boy Jo. Lady Dedlock waits until Esther has recovered before telling her the truth. Though Esther and Lady Dedlock are happy to be reunited, Lady Dedlock tells Esther they must never acknowledge their connection again.