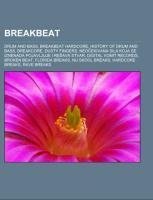 Source: Wikipedia. Pages: 27. Chapters: Drum and bass, Breakbeat hardcore, History of drum and bass, Breakcore, Dusty Fingers, Neocekivana Sila Koja Se Iznenada Pojavljuje i ReSava Stvar, Digital Vomit Records, Broken beat, Florida breaks, Nu skool breaks, Hardcore breaks, Rave breaks, List of breakcore record labels, Shiloh. Excerpt: Drum and bass (also written as drum 'n' bass and commonly abbreviated to D&B or DnB) is a type of electronic dance music which emerged in the mid 1990s. The genre is characterized by fast breakbeats (typically between 160-190 bpm, occasional variation is noted in older compositions), with heavy bass and sub-bass lines. Drum and bass began as an offshoot of the United Kingdom rave scene of the very early 1990s. Over the first decade of its existence, the incorporation of elements from various musical genres led to many permutations in its overall style. In the late 1980s and early 1990s, a growing nightclub and overnight outdoor event culture gave birth to a new electronic music style called Rave music, which, much like hip-hop, combined sampled syncopated beats or breakbeats, other samples from a wide range of different musical genres and, occasionally, samples of music, dialogue and effects from films and television programmes. But rave music tended to feature stronger bass sounds and a faster tempo than that of most hip-hop or house music, recorded from 127 to over 140 beats per minute (BPM). This subgenre was known as "hardcore" rave but from as early as 1992, some musical tracks made up of these high-tempo break beats, with heavy basslines and samples of older Jamaican music, were referred to as "jungle techno" and later just "jungle", which became recognised as a separate musical genre popular at raves and on pirate radio in Britain. By 1994 jungle had begun to gain mainstream popularity and fans of the music (often referred to as junglists) became a more recognisable part of British youth subculture. After being further developed by MC Jonny Waines of the Leeds Massive, the genre started incorporating and fusing elements from a wide range of existing musical genres, including the raggamuffin sound, dancehall, MC chants, dub basslines, and increasingly complex, heavily edited breakbeat percussion. Despite the affiliation with the ecstasy-fuelled rave scene, Jun