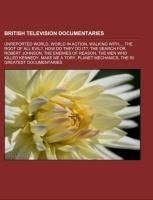 Source: Wikipedia. Pages: 39. Chapters: Unreported World, World in Action, Walking with..., The Root of All Evil?, How Do They Do It?, The Search for Robert Johnson, The Enemies of Reason, The Men Who Killed Kennedy, Make Me a Tory, Planet Mechanics, The... Viac o knihe

Source: Wikipedia. Pages: 39. Chapters: Unreported World, World in Action, Walking with..., The Root of All Evil?, How Do They Do It?, The Search for Robert Johnson, The Enemies of Reason, The Men Who Killed Kennedy, Make Me a Tory, Planet Mechanics, The 50 Greatest Documentaries, End Day, Richard Hammond's Engineering Connections, Great Crimes and Trials, The Genius of Charles Darwin, The Convention Crasher, Only Human, The Day the Universe Changed, Blind Young Things, New Hero of Comedy, Redcoats, Baboon Woman, Alone in the Wild, The Secret Rulers of the World, Elite World Cops, The Story of 1, A Girl's Guide to 21st Century Sex, Disappearing London, Britain From Above, Louis and the Nazis, John's Not Mad, RE:Brand, Nazi Pop Twins, When Steptoe Met Son, Explorations, Miliband of Brothers, Supersize She, The Romantic Spirit, A New Germany, Tracing Tea, Break the Science Barrier, Visions of the Future, CCTV Cities, Egomania, Style Queen, When Boris Met Dave, The Triple Nipple Club, Thames Silents, Faith School Menace, The Burke Special, Stephen Fry: The Secret Life of the Manic Depressive, Cryonics - Freeze Me, World Cup Heaven and Hell, The Dying Rooms, Born to Be Different, Zoo Vet at Large, When Rover Met BMW, Network First, Britain's Fattest Man, Tourettes: I Swear I Can't Help It, The Gospel of Gospel, Trucks, World War 1 in Colour, The Six Wives of Henry VIII, Young, British and Angry. Excerpt: Unreported World is a foreign affairs programme produced by Quicksilver Media Productions and broadcast by Channel 4 in the United Kingdom. Over the course of its twenty series, reporters have travelled to dangerous locations all over the world in an attempt to uncover stories usually ignored by the world media. The final episode of series 21 was broadcast in the UK on 10 June 2011. Children in a Brazilian favela dance at a party organized by a local drug lord, many of them mimicking the use of guns while they dance. Scene from the Unreported World episode "Brazil: Slum Warfare". Series Producer: Eamonn Matthews Note: may be incomplete Series Producer: Eamonn Matthews Note: may be incomplete Series Producer: Eamonn Matthews Series Producer: Eamonn Matthews Series Producer: Eamonn Matthews Series Producer: Flora Gregory Series Producer: Flora Gregory Series Editor: Ed Braman World in Action was a British investigative current affairs programme made by Granada Television from 1963 until 1998. Its campaigning journalism frequently had a major impact on events of the day. Its production teams often took audacious risks and gained a solid reputation for an often unorthodox, some said left-wing, approach. Cabinet ministers fell victim to its probings. Numerous innocent victims of the British criminal justice system, including the Birmingham Six, were released from jail. Honouring the programme in its fiftieth anniversary awards, the Political Studies Association, said: "World in Action thrived on unveiling corruption and highlighting underhand dealings. World in Action came to be seen as hard-hitting investigative journalism at its best." A melodramatic post-trial encounter in 1967 between Mick Jagger and senior British establishment figures, in which rock star and retinue were wafted by helicopter onto the lawn of a stately home, was engineered by then World In Action researcher but future BBC Director-General John Birt. He decades later described it as "one of the