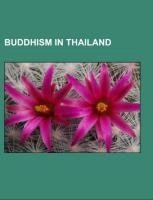 Source: Wikipedia. Pages: 27. Chapters: Thai Forest Tradition, Iconography of Gautama Buddha in Laos and Thailand, Dhammananda Bhikkhuni, Dhammakaya Movement, Mae ji, Sangharaja, Buddha images in Thailand, Supreme Patriarch of Thailand, Dhammayuttika Nikaya, The Life of Buddha, Santi Asoke, Sanam Luang Dhamma Studies, Ayya, Sat Thai, Ajahn Khemadhammo, Jatukham Rammathep, Karuna Meditation Center, Maha Nikaya, Ariyavangsagatayana, Ariyavangsagatayana, 16th Supreme Patriarch of Thailand, Ariyavangsagatayana, 17th Supreme Patriarch of Thailand, Khatha, Phutthamonthon, Temple boy. Excerpt: Buddhism in Thailand is largely of the Theravada school. Nearly 95% of Thailand's population is Buddhist of the Theravada school, though Buddhism in this country has become integrated with folk beliefs as well as Chinese religions from the large Thai-Chinese population. Buddhist temples in Thailand are characterized by tall golden stupas, and the Buddhist architecture of Thailand is similar to that in other Southeast Asian countries, particularly Cambodia and Laos, with which Thailand shares cultural and historical heritage. Thai Buddhism was based on the religious movement founded in the sixth century B.C. by Siddhartha, later known as the Buddha, who urged the world to relinquish the extremes of sensuality and self-mortification and follow the enlightened Middle Way. The focus of this religion is on man, not gods; the assumption is that life is pain or suffering, which is a consequence of craving, and that suffering can end only if desire ceases. The end of suffering is the achievement of nirvana (in Theravada Buddhist scriptures, nibbana), often defined as the absence of craving and therefore of suffering, sometimes as enlightenment or bliss. By the third century B.C., Buddhism had spread widely in Asia, and divergent interpretations of the Buddha's teachings had led to the establishment of several sects. The teachings that reached Ceylon (present-day Sri Lanka) were first written down in Pali (an Indo-Aryan language closely related to Sanskrit) in the first century A.D. and provided the Tipitaka (the scriptures or "three baskets"; in Sanskrit, Tripitaka) of Theravada Buddhism. This form of Buddhism was made the state religion only with the establishment of the Thai kingdom of Sukhothai in the thirteenth century A.D. According to many historians, around 228 B.C. Sohn Uttar Sthavira (one of the royal monks sent by Ashoka the Great) came to Suvarnabhumi (or Suvannabhumi) which some idendify with Thailand along with other monks and sacred books. Buddhist proselytism