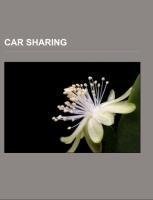 Source: Wikipedia. Pages: 24. Chapters: Zipcar, Peer-to-peer car rental, Streetcar, Flexcar, Mobility CarSharing, City Car Club, Momo car-sharing, Whizzgo, PhillyCarShare, Cambio CarSharing, I-GO, Witkar, RelayRides, Communauto, Car2Go, U Car Share, StattAuto, GoGet, Buffalo CarShare, AutoShare, GoCar, Greenwheels, PeoplesCar. Excerpt: Zipcar is a membership-based car sharing company providing automobile reservations to its members, billable by the hour or day. Zipcar was founded in 2000 by Cambridge, Massachusetts residents Antje Danielson and Robin Chase, and is now led by Scott Griffith, Chairman and Chief Executive Officer. As of December 2010, the company offers a fleet of over 8,000 vehicles in urban areas throughout 28 North American states and provinces, as well as in the United Kingdom, and has over 560,000 members which the company refers to as "Zipsters". Zipcar offers more than 30 makes and models of self-service vehicles by the hour or day. Zipcar has major operations in Atlanta, Baltimore, Boston, Chicago, London, New York, Philadelphia, Pittsburgh, Portland, San Francisco, Seattle, Toronto, Washington D.C. and Vancouver. The company also has presence on over 230 college campuses. Members can reserve Zipcars online or by phone, 24 hours a day, seven days a week. Reservations can be made minutes up to a year in advance. Zipcar members have automated access to Zipcars using an access card called a "Zipcard," which works with the car's technology to unlock the door, where the keys are already located inside. Zipcar also offers an iPhone application, recognized by Time magazine as one of the "Best Travel Gadgets of 2009," that allows members to honk the horn to locate a Zipcar and unlock the doors. Zipcar charges a one-time application fee of $25, and an annual fee of $60, depending on the market, and reservation rates start from $7.50 per hour and $56 per day. Rate prices vary by market, time of day, day of the week and the make and model of the vehicle being reserved. Gas, parking, insurance, and maintenance are included in the price. In the fall of 2007, Zipcar merged with Seattle-based rival Flexcar to create a car-sharing company with national scope. In December 2009, Zipcar announced their participation in a round of financing with the existing owners of Catalunya Carsharing S.A.,