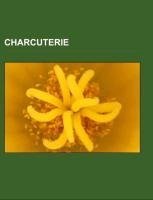 Source: Wikipedia. Pages: 31. Chapters: Bacon, Bayonne ham, Confit, D'Artagnan, Inc., Dopo / Adesso, Éisleker Ham, Fatback, Galantine, Garde manger, Pâté, Salo (food), Salt pork, Sausage, Smallgoods, Speck, Terrine (food). Excerpt: A sausage is a food usually made from ground meat with a skin around it. Typically, a sausage is formed in a casing traditionally made from intestine, but sometimes synthetic. Some sausages are cooked during processing and the casing may be removed after. Sausage making is a traditional food preservation technique. Sausages may be preserved by curing, drying, or smoking. Sausage making at homeSausage making is a logical outcome of efficient butchery. Traditionally, sausage makers would salt various tissues and organs such as scraps, organ meats, blood, and fat to help preserve them. They would then stuff them into tubular casings made from the cleaned intestines of the animal, producing the characteristic cylindrical shape. Hence, sausages, puddings, and salami are among the oldest of prepared foods, whether cooked and eaten immediately or dried to varying degrees. Early humans made the first sausages by stuffing roasted intestines into stomachs. The Greek poet Homer mentioned a kind of blood sausage in the Odyssey, Epicharmus wrote a comedy titled The Sausage, and Aristophanes' play The Knights is about a sausage-vendor who is elected leader. Evidence suggests that sausages were already popular both among the ancient Greeks and Romans, and most likely with the various tribes occupying the larger part of Europe. German Wurst: liver sausage, blood sausage, and ham sausageThe most famous sausage in ancient Italy was from Lucania (modern Basilicata) and was called lucanica, a name which lives on in a variety of modern sausages in the Mediterranean. During the reign of the Roman emperor Nero, sausages were associated with the Lupercalia festival. Early in the 10th century during the Byzantine Empire, Leo VI the Wise outlawed the production of blood sausages following cases of food poisoning. The word sausage is derived from Old French saussiche, from the Latin word salsus meaning "salted". Pâté is a similar product made of cooked and minced meat. See also, terrine. Trad