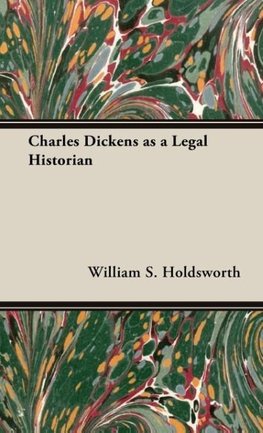 Charles Dickens as a Legal Historian

CHARLES DICKENS AS A LEGAL HISTORIAN By William S. Holdsworth. First published, September, 1928. Contents include: I. The Courts and the Dwellings of the Lawyers. II The Lawyers, Lawyers' Clerks, and Other Satellites of the Law 43. III. Bleak House and... Viac o knihe

CHARLES DICKENS AS A LEGAL HISTORIAN By William S. Holdsworth. First published, September, 1928. Contents include: I. The Courts and the Dwellings of the Lawyers. II The Lawyers, Lawyers' Clerks, and Other Satellites of the Law 43. III. Bleak House and the Procedure of the Court of Chancery 79. IV. Pickwick and the Procedure of the Common Law 117. Index 151. Dickens as a Legal Historian I. The Courts and the Dwellings of the Lawyers. MANY of Charles Dickens's novels touch upon the law and lawyers, in some of them the law and lawyers play a considerable part, and in one of them, Bleak House, the legal atmosphere is all pervading. Dickens was born in 1812; and the dates of these novels range from 1835 to 1870; so that the law and the lawyers, which Dickens had observed and described, were the law and the lawyers of the first two-thirds of the nineteenth century. That is now a period which has passed into history, and is beginning to attract the atten tion of historians, legal and otherwise. In these lectures I intend to show you that the treatment by Dickens of various aspects of the law and the lawyers of his day, is a yery valuable addition to our authorities, not only for that period, but also for earlier periods in our legal history. The time at which the scene of many of Dickens's novels is laid dates, in many cases, be i Dickens as a Legal Historian fore the era of reformjiad, begun; and, when he began to write, it had only just begun. Pickwick set out on his travels in 1827, and the book was written in 1836. At the time when Dickens wrote his later works the Legislature had begun, tenta tively and cautiously, to make those reforms in the machinery of the law, and in the law itself, which were long overdue. But much still remained to be done. Bleak House was written in 1852-1853; and, though some of the abuses there de scribed had been remedied, there was still much which needed reform. Hence in Dickens's descrip tions of the courts, the lawyers, and the law of his day, we get an account of those many archaic sur vivals, which help us to understand earlier periods in the history of our law; we get an account of the way in which the curious mixture of ancient and modern rules, which made up the law of that time, were then worked and applied; and we get an ac count of the results which they produced. It is obvious that a series of pictures of this age of transition, painted by an exceptionally gifted ob server, is of unique value to the legal historian. There are two main reasons why Dickens's pic tures of the courts, the lawyers, and the law of his day have this unique value. In the first place, they