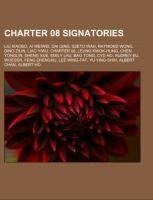 Source: Wikipedia. Pages: 43. Chapters: Liu Xiaobo, Ai Weiwei, Dai Qing, Szeto Wah, Raymond Wong, Ding Zilin, Liao Yiwu, Charter 08, Leung Kwok-hung, Chen Yonglin, Sheng Xue, Emily Lau, Bao Tong, Cyd Ho, Audrey Eu, Woeser, Feng Zhenghu, Lee Wing-tat, Yu Ying-shih, Albert Chan, Albert Ho, Lee Cheuk-yan, Yang Jianli, Alan Leong, Yu Jie, Nelson Wong, Kam Nai-wai, Margaret Ng, James To, Andrew Cheng, Tanya Chan, Wan Yanhai, Cheung Man-kwong, He Qinglian, Yuan Hongbing, Ronny Tong, Gao Yu, Fred Li, Leung Yiu-chung, Liu Junning, Andrew To, Yan Jiaqi, He Weifang, Liu Di, Sha Yexin, Zheng Enchong, Zheng Yuanjie. Excerpt: Liu Xiaobo (pronunciation: ; born 28 December 1955) is a Chinese literary critic, writer, professor, and human rights activist who called for political reforms and the end of communist one-party rule in the People's Republic of China (PRC). He is currently incarcerated as a political prisoner in the PRC. Liu has served from 2003 to 2007 as President of the Independent Chinese PEN Center, an organization funded by the National Endowment for Democracy, an organization almost entirely funded by the US Congress. He was also the President of NED-funded MinZhuZhongGuo (Democratic China) magazine since the mid-1990s. On 8 December 2008, Liu was detained in response to his participation with the Charter 08 manifesto. He was formally arrested on 23 June 2009, on suspicion of "inciting subversion of state power." He was tried on the same charges on 23 December 2009, and sentenced to eleven years' imprisonment and two years' deprivation of political rights on 25 December 2009. During his fourth prison term, he was awarded the 2010 Nobel Peace Prize, for "his long and non-violent struggle for fundamental human rights in China." He is the first Chinese citizen to be awarded a Nobel Prize of any kind while residing in China. Liu is the third person to be awarded the Nobel Peace Prize while in prison or detention, after Germany's Carl von Ossietzky (1935) and Burma's Aung San Suu Kyi (1991). Liu is also the first person since Ossietzky to be denied the right to have a representative collect the Nobel prize for him. Liu was born in Changchun, Jilin, in 1955 to an intellectual family. In 1969, during the Down to the Countryside Movement, he was taken by his father to the Horqin Right Front Banner of Inner Mongolia. After he finished middle school in 1974, he was sent to the countryside to work on a farm in Jilin province. In 1977, Liu was admitted to the Department of Chinese literature at Jilin University. While at Jilin, he created a poetry group known as The Innocent Hearts (Chi