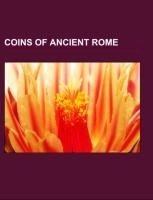 Source: Wikipedia. Pages: 47. Chapters: Denarius, Roman Republican currency, Peace symbols, Roman currency, Byzantine coinage, Sestertius, Solidus, Coinage of the Social War, Roman Procurator coinage, Orichalcum, As, Fourrée, Talent, Judaea Capta coinage, Denarius of L. Censorinus, Nummus, Bigatus, Roman Imperial currency, Pyotr Osipovich Karyshkovskij-Ikar, Follis, Aureus, Antoninianus, Barbarous radiate, Aes grave, Dupondius, Quadrigatus, Spintria, Aes rude, Quintus Pomponius Musa, Siliqua, Aes signatum, Prutah, Quadrans, Reka Devnia Hoard, Double sestertius, Victoriatus, Uncia, Tremissis, Cistophorus, Quincunx, Miliarense, Quinarius, Dacicus, Dodrans, Scrupulum, Argenteus, Semis, Gnaeus Lucretius, Lucius Lucretius, Triens, Centenionalis, Semuncia, Sextans, Triumvir Monetalis, Bes. Excerpt: Coinage came late to the Roman Republic compared with the rest of the Mediterranean, especially Greece and Asia Minor where coins were invented in the 7th century BC. The currency of central Italy was influenced by its natural resources, with bronze being abundant (the Etruscans were famous metal workers in bronze and iron) and silver ore being scarce. The coinage of the Roman Republic started with a few silver coins apparently devised for trade with the Greek colonies in Southern Italy, and heavy cast bronze pieces for use in Central Italy. During the Second Punic war a flexible system of coins in bronze, silver and (occasionally) gold was created. This system was dominated by the silver denarius, a denomination which remained in circulation for 450 years. The coins of the republic (especially the denarii) are of particular interest because they were produced by "mint magistrates", junior officials who choose the designs and legends. This resulted in the production of coins advertising the officials' families for political purposes; most of the messages on these coins can still be understood today. Before the introduction of coinage in Italy the two important forms of value in the economy were cattle (pecus), from which the Latin word for money (pecunia) is derived, and irregularly-shaped pieces of bronze known as aes rude (rough bronze) which needed to be weighed for each transaction. It is unclear when money became commonly used, but Roman tradition recorded that pay of the army began during the siege of Veii in 406 BC and it appears that Aes rude was the currency well before this. Toward the end of the 4th century BC bronze began to be cast in flat bars which are known today, without any historical authority, as aes signatum (signed bronze). These bars were heavily leaded, of varying weights although generally on the order of five Roman pounds, and usually had a design on one and later both sides. The actual function of aes signatum has been variously interprete