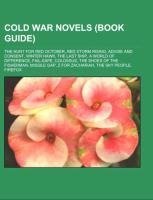 Source: Wikipedia. Commentary (novels not included). Pages: 25. Chapters: The Hunt for Red October, Red Storm Rising, Advise and Consent, Winter Hawk, The Last Ship, A World of Difference, Fail-Safe, Colossus, The Shoes of the Fisherman, Missile Gap, Z for Zachariah, The Sky People, Firefox, In the Courts of the Crimson Kings, To Kill the Potemkin, Red Alert, Vortex, The Gladiator, Capable of Honor, Firefox Down, Colonization: Aftershocks, Commander-1, Colonization: Second Contact, The Dragon's Pearl, A Shade of Difference, Colonization: Down to Earth, Red Army, The Mouse on the Moon, Storming Intrepid. Excerpt: Red Storm Rising is a 1986 techno-thriller novel by Tom Clancy and Larry Bond about a Third World War in Europe between NATO and Warsaw Pact forces, set around the mid-1980s. Though there are other novels dealing with a fictional World War III, this one is notable for the way in which numerous settings for the action - from Atlantic convoy duty to shooting down reconnaissance satellites to tank battles in Germany - all have an integral part to play on the outcome. This is one of two novels that has no association with Clancy's others (the other being SSN), as it does not fall in the Ryanverse. The novel eventually lent its name to a game development company called Red Storm Entertainment, which Clancy co-founded in 1997. Islamic terrorists from Azerbaijan destroy a new oil-production facility at Nizhnevartovsk, USSR, crippling Soviet oil production and threatening to wreck the Soviet economy. Seemingly needing to make crippling concessions to the West to survive the crisis, the Politburo chooses a different path: war. The Politburo decides to seize the Persian Gulf oil fields by force. (It is unknown if Tom Clancy was inspired by, or even knew about, the Siberian pipeline sabotage explosion for this key plot item). According to the Carter Doctrine, any attack on the Persian Gulf is an attack on a vital strategic interest of the United States, and will be treated as such, meaning a military response. To prevent NATO's combined reaction, they first launch a KGB operation to split NATO by making it appear as if West Germany had launched an unprovoked terrorist attack on the Soviet Union, followed by an invasion of Europe in response to that "attack." With West Germany occupied, and NATO defeated, it is hoped that the United States will not feel the need to rescue the Arab oil states, as it can meet its oil needs with Western Hemisphere sources. In order to mobilize popular support within the Soviet Union specifically against West Germany, the Politburo arranges a bomb