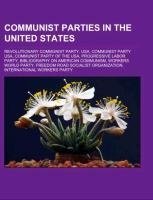 Communist parties in the United States

Source: Wikipedia. Pages: 63. Chapters: Revolutionary Communist Party, USA, Communist Party USA, Communist Party of the USA, Progressive Labor Party, Bibliography on American Communism, Workers World Party, Freedom Road Socialist Organization, International Workers Party, League of Revolutionary Black Workers, Revolutionary Workers League, Workers Communist League, Workers Party of America, Democratic Workers Party, Proletarian Party of America, Communist League of Struggle, White Panther Party, Party for Socialism and Liberation, Communist Labor Party, Fieldites, Sojourner Truth Organization, League of Revolutionaries for a New America, International Committee Against Racism, Ray O. Light, Rummagers League, Leninist League, Standing Together to Organize a Revolutionary Movement, Workers Party, USA, News and Letters Committees, Socialist Action, Marxist Workers' League, Revolutionary Workers Headquarters, Kasama Project, Council communists, Revolutionary Marxist League, Revolutionary Communist Vanguard, Communist Voice Organization, Internationalism, Black Workers Congress, Marxist Workers Party, The Trend, U.S. Marxist-Leninist Organization, Communist Union, Communist Labor Party of North America. Excerpt: The Communist Party USA (CPUSA) is a Marxist political party in the United States, established in 1919. It has a long, complex history that is closely related to the histories of similar communist parties worldwide and the U.S. labor movement. For the first half of the 20th century, the CPUSA was the largest and most influential communist party in the United States. It played a very prominent role in the U.S. labor movement from the 1920s through the 1940s, having a major hand in founding most of the country's first industrial unions (which would later expel communists by adopting the Smith Act) while also becoming known for opposing racism and fighting for integration in workplaces and communities during the height of the Jim Crow period of U.S. racial segregation. Historian Ellen Schrecker concludes that decades of recent scholarship offers a "nuanced portrayal of the party as both a Stalinist sect tied to a vicious regime and the most dynamic organization within the American Left during the 1930s and '40s". In regards to the former charge, the CPUSA, claiming proletarian internationalism (while the U.S. Government called it espionage), sponsored an elaborate intelligence network on behalf of the Soviet Union, involving over 500 members acting as agents. The most prominent example dealt with the Manhattan Project in which the network was accused in giving the blueprints of the atomic bomb to the Soviets; Julius and Ethel Rosenberg were thereafter convicted and executed as the chief architects of this plan. Later evidence proved that the Rosenbergs did not have the plans but the use of fear of Communism and its spread, helped to render a guilty verdict. By August 1919, only months after its founding, the CPUSA had 60,000 members, including anarchists and other radical leftists, while the more moderate Socialist Party of America had only 40,000 members. The sections of the CP's International Workers Order meanwhile organized for communism around linguistic and ethn