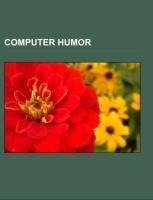 Source: Wikipedia. Pages: 41. Chapters: Any key, April Fools' Day Request for Comments, Bastard Operator From Hell, Blinkenlights, Bush hid the facts, COMEFROM, Easter eggs in Microsoft products, Easter egg (media), Elephant in Cairo, Evil bit, F. X. Reid, FINO, Garbage in, garbage out, Hacker koan, Halt and Catch Fire, Hexspeak, Hex (Discworld), Hyper Text Coffee Pot Control Protocol, Interactive EasyFlow, Internet Oracle, IP over Avian Carriers, J. Random Hacker, Jargon File, List of User Friendly characters, Lp0 on fire, Magic smoke, Ninety-ninety rule, PC LOAD LETTER, The Book of Mozilla, The Complexity of Songs, The Daily WTF, The Joy of Tech, The Tao of Programming, TPS report, User error, Visual inspection, Write-only language, Write-only memory (joke). Excerpt: User Friendly characters are the characters that feature on the webcomic User Friendly. First Appearance: November 17, 1997A.J. Garrett is the creative guy for the company, maintaining and designing their websites. As a web designer, he's uncomfortably crammed in that tiny crevice between the techies and the marketing people. This means he's not disliked by anyone, but they all look at him funny from time to time. A.J. is shy and sensitive. He loves most computer games, nifty art, and has a big brother relationship with the Dust Puppy. A.J. is terrified of Grues and attempts to avoid them. A.J. was downsized on September 5, 1998, following iCan't Internet's purchase of Columbia Internet on August 24, 1998, but was re-engaged on October 17, 1998 after the company had been rebought. He lost his job again on October 16, 2002, following working on a personal project, and was employed by AOL. Having suffered an Ethicectomy, he became a clone of Stef - fortunately following an Ethics donation from Colin Powell he was re-employed. He and Miranda have previously dated, but split up over a misunderstanding. They remained attracted to each other and started dating again on September 16, 2005. First Appearance: November 19, 1997The Chief is Columbia Internet's CEO. He is the fearless leader for the techies and salespeople, as well as the only calm, clear-thinking head in the company. He wouldn't be if he knew what was really going on. The Chief is also a closet guitar player, having spent years mastering the art of perfect tone, only to have computers come along and render all of his effort meaningless. Illiad based the character on a former boss: The Chief bears a superficial resemblance to the Pointy-Haired Boss of Dilbert fame - he once was referred as the "Pointy Headed Boss", and asked whether it was a mistake. However, Illiad says that The Chief was not inspired by the Dilbert character. First Appearance: December 3, 1997The Dust Puppy was born in a server from a combina

Man in the Brown Suit

Lone Wolf and Cub 13 : The Moon in East the Sun in West

Notes for a War Story

Klezmer: Book One: Tales of the Wild East

Lone Wolf and Cub 9: Echo of the Assassin 9