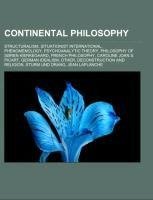 Source: Wikipedia. Pages: 71. Chapters: Structuralism, Situationist International, Phenomenology, Psychoanalytic theory, Philosophy of Søren Kierkegaard, French philosophy, Caroline Joan S. Picart, German idealism, Other, Deconstruction and religion, Sturm und Drang, Jean Laplanche, Metaphor in philosophy, The Question Concerning Technology, Simulacrum, Babette Babich, Afterwardsness, Index of continental philosophy articles, Ontotheology, Maxence Caron, Dasein, Value judgment, Ljubljana school of psychoanalysis, Paul W. Franks, Foucault-Habermas debate, Multiplicity, Phenomenological life, Stephen David Ross, Genealogy, Face-to-face, Derrida Today, Cartesian Meditations, Graduate Faculty Philosophy Journal, Alterity, Leveling, Heidegger Studies, Études Phénoménologiques, Philosophy of dialogue, Historical subject, Miran Bozovic, Deleuze Studies, French Theory, Thrownness, Postmodernism, or, the Cultural Logic of Late Capitalism, Difference. Excerpt: The Situationist International (SI) was a restricted group of international revolutionaries founded in 1957, and which had its peak in its influence on the unprecedented general strike of May 1968 in France. With their ideas rooted in Marxism and the 20th century European artistic avant-gardes, they advocated experiences of life being alternative to those admitted by the capitalist order, for the fulfillment of human primitive desires and the pursuing of a superior passional quality. For this purpose they suggested and experimented with the construction of situations, namely the setting up of environments favorable for the fulfillment of such desires. Using methods drawn from the arts, they developed a series of experimental fields of study for the construction of such situations, like unitary urbanism and psychogeography. They fought against the main obstacle to the fulfillment of such superior passionate living, identified by them in advanced capitalism. Their theoretical work peaked with the highly influential book The Society of the Spectacle by Guy Debord. Debord argued in 1967 that spectacular features like mass media and advertising have a central role in an advanced capitalist society, which is to show a fake reality in order to mask the real capitalist degradation of human life. To overthrow such a system, the Situationist International supported the May '68 revolts, and asked the workers to occupy the factories and to run them with direct democracy, through workers' councils composed by instantly revocable delegates. After publishing in the last issue of the magazine, an analysis of the May 1968 revolts and the strategies that will need to be adopted in future revolutions, the SI was dissolved in 1972. The appellation "situationist" refers to one who engages in the construction of "situations" or specifically a member of the Situationist International. In adjectival form, the term means relating to the theory or practical activity of constructing "situatio

An Introduction to Moder Jewish Philosophy

How to Read Hume

How to Read Descartes