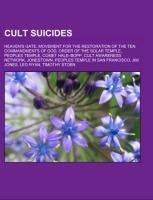 Source: Wikipedia. Pages: 86. Chapters: Heaven's Gate, Movement for the Restoration of the Ten Commandments of God, Order of the Solar Temple, Peoples Temple, Comet Hale-Bopp, Cult Awareness Network, Jonestown, Peoples Temple in San Francisco, Jim Jones, Leo Ryan, Timothy Stoen, Jackie Speier, The Brian Jonestown Massacre, Mark Lane, Jonestown conspiracy theory, George Moscone, Cult suicide, Marshall Applewhite, Donald Freed, Raven, Don Harris, Drinking the Kool-Aid, Charles Garry, Guyana Tragedy: The Story of Jim Jones, Morin-Heights, Quebec, Michel Tabachnik, Seductive Poison, Luc Jouret, Bonnie Nettles, Jonestown: The Life and Death of Peoples Temple, Joseph Kibweteere, Credonia Mwerinde, John R. Burke, Flavor Aid, Death tape, Guyana: Crime of the Century, Black & White, Jonestown: Paradise Lost, Wings of deliverance. Excerpt: Jonestown was the informal name for the Peoples Temple Agricultural Project, an intentional community in northwestern Guyana formed by the Peoples Temple, a cult led by Jim Jones. It became internationally notorious when, on November 18, 1978, 918 people died in the settlement as well as in a nearby airstrip and in Georgetown, Guyana's capital. The name of the settlement became synonymous with the incidents at those locations. A total of 909 Temple members died in Jonestown, all but two from apparent cyanide poisoning, in an event termed "revolutionary suicide" by Jones and some members on an audio tape of the event and in prior discussions. The poisonings in Jonestown followed the murder of five others by Temple members at a nearby Port Kaituma airstrip. The victims included Congressman Leo Ryan, the first member of Congress assassinated in the line of duty in the history of the United States. Four other Temple members died in Georgetown at Jones' command. To the extent the actions in Jonestown were viewed as a mass suicide (controversial as many were allegedly forced to participate, including babies), it is the largest such event in modern history and resulted in the largest single loss of American civilian life in a non-natural disaster until the events of September 11, 2001. The Peoples Temple was formed in Indianapolis, Indiana during the mid-1950s. It purported to practise what it called "apostolic socialism". In doing so, the Temple preached to established members that "those who remained drugged with the opiate of religion had to be brought to enlightenment - socialism." After Jones received considerable criticism in Indiana for his integrationist views, the Temple moved to Redwood Valley, California in 1965. In the early 1970s, the Peoples Temple opened other branches in California, including in Los Angeles and San Francisco. In the mid-1970s, the Temple moved its headquarters to San Francisco. After the Temple's move to San Francisco, it became more politi