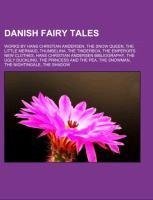 Source: Wikipedia. Pages: 46. Chapters: Works by Hans Christian Andersen, The Snow Queen, The Little Mermaid, Thumbelina, The Tinderbox, The Emperor's New Clothes, Hans Christian Andersen bibliography, The Ugly Duckling, The Princess and the Pea, The Snowman, The Nightingale, The Shadow, The Steadfast Tin Soldier, The Most Incredible Thing, The Wild Swans, The Sweethearts; or, The Top and the Ball, New Fairy Tales, The Fir-Tree, The Red Shoes, The Angel, The Swineherd, Esben and the Witch, The Shepherdess and the Chimney Sweep, Fairy Tales Told for Children. First Collection., The Prince and the Princess in the Forest, The Elf Mound, The Flying Trunk, The Green Knight, Ole Lukøje, The White Dove, Niels and the Giants, The Princess in the Chest, The Galoshes of Fortune, Maiden Bright-eye, The Troll's Daughter, The Magic Book, The Teapot, The Garden of Paradise, The Goblin and the Grocer, Master and Pupil, I know what I have learned, Golden Treasure, Several Things. Excerpt: The Snow Queen (Danish: Sneedronningen) is a fairy tale by author Hans Christian Andersen (1805-1875). The tale was first published in 1845, and centers on the struggle between good and evil as experienced by a little boy and girl, Kai and Gerda. The story is one of Andersen's longest and is considered by scholars, critics, and readers alike as one of his best. It is regularly included in selected tales and collections of his work as well as being frequently reprinted in illustrated storybook editions for children. The tale has been adapted in various media including animated film and television drama. The Snow Queen is a tale told in seven 'stories' (Danish: Historier): Cover of a modern Danish edition of The Snow Queen (Sneedronningen) Vilhelm Pedersen illustration.An evil "troll," "actually the devil himself", makes a magic mirror that has the power to distort the appearance of things reflected in it. It fails to reflect all the good and beautiful aspects of people and things while it magnifies all the bad and ugly aspects so that they look even worse than they really are. The devil teaches a "devil school," and the devil and his pupils delight in taking the mirror throughout the world to distort everyone and everything. They enjoy how the mirror makes the loveliest landscapes look like "boiled spinach." They then want to carry the mirror into heaven with the idea of making fools of the angels and God, but the higher they lift it, the more the mirror grins and shakes with delight. It shakes so much that it slips from their grasp and falls back to earth where it shatters into billions of pieces - some no larger than a grain of sand. These splinters are blown around and get into people's hearts and eyes, making their hearts frozen like blocks of ice and their eyes like the troll-mirror itself, only seeing the bad and ugly in people and things. Vilhelm Pedersen illustration.Years later, a little boy, Kay, and a little girl, Gerda, live next door to each other in the