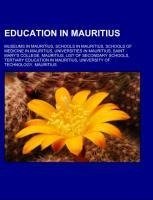 Source: Wikipedia. Pages: 25. Chapters: Museums in Mauritius, Schools in Mauritius, Schools of medicine in Mauritius, Universities in Mauritius, Saint Mary's College, Mauritius, List of secondary schools, Tertiary education in Mauritius, University of Technology, Mauritius, St. Joseph's College, Curepipe, Dr Regis Chaperon State Secondary School, Royal College Curepipe, Royal College Port-Louis, La Gaulette State Secondary school, Le Bocage International School, St Andrew's School Mauritius, Eden College, Loreto College of Rose-Hill, Queen Elizabeth College, Mauritius, New Educational College, Beekrumsing Ramlallah State Secondary School, Bell Village SSS, Rodrigues College, Blue Penny Museum, Rabindranath Tagore Secondary School, John Kennedy College, Sir Seewoosagur Ramgoolam Medical College, Nightingale College Surinam Mauritius, Port-Louis State Secondary School, List of universities in Mauritius. Excerpt: The education system in Mauritius is largely based on the British system since Mauritius was a former British colony. After the country became independent in 1968, education became one of the main preoccupations of the Mauritian Government to meet the new challenges awaiting the country. Considerable investment of resources, both human and material, has been put into the Education sector and impressive progress has lbeen achieved in terms of free, universal, compulsory primary education, free textbooks, free secondary education and a fairly wide range of higher education courses at the University of Mauritius. Education has been free through the secondary level since 1976 and through the post-secondary level since 1988. The government has made an effort to provide adequate funding for education, occasionally straining tight budgets and even subsidised a great part of the expenditure in the Private Confessional schools, that is, schools under the control of the Catholic Church. However, the pre-primary schools are still privately owned. Mauritius has a population of about 1.2 million inhabitants of whom the majority are from Indian origin. The population of African origin is the second largest population in Mauritius, and small sections of the population are of Chinese and French origins. The medium of instruction in schools is English, since the impact of colonialism is still very present. English is the official language of Mauritius but the majority of the population speaks the French-based Mauritian Creole in their everyday interactions. However, the teaching of some Asian languages (Hindi, Urdu, Mandarin Chinese and Arabic) is also included in the curriculum. The education system consists of the Primary and Secondary sectors. Children are enrolled in primary school from the age of five and enter Standard I and move automatically up to Standard VI. The system is highly competitive and a two-year preparation starts since Standard V up to Standard VI for the end of