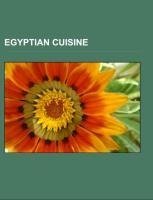 Source: Wikipedia. Pages: 26. Chapters: Halloumi, Kebab, Halva, Ka'ak, Eggplant salads and appetizers, Tahini, Semolina, Mulukhiyah, Ful medames, Baba ghanoush, Fatteh, Fig roll, Pastitsio, Duqqa, Freekeh, Qatayef, Shish taouk, Kushari, Kashk, Aish Merahrah, Fesikh, Domiati, Baladi cheese. Excerpt: Kebab (Turkish:Kebap,Kurdish language:¿¿¿¿¿¿¿ Persian:¿¿¿¿, also kebap, kabab, kebob, kabob, kibob, kebhav, kephav, kebabie, Cevap) is a wide variety of meat dishes originating in Persia and later on adopted by the Middle East and Asia Minor, and now found worldwide. In English, kebab with no qualification generally refers more specifically to shish kebab served on the skewer or döner kebab served wrapped in bread with a salad and a dressing. In the Middle East, however, kebab includes grilled, roasted, and stewed dishes of large or small cuts of meat, or even ground meat; it may be served on plates, in sandwiches, or in bowls. The traditional meat for kebab is lamb, but depending on local tastes and taboos, it may now be beef, goat, chicken, pork; fish and seafood; or even vegetarian foods like falafel or tofu. Like other ethnic foods brought by travellers, the kebab has become part of everyday cuisine in many countries around the globe. The Arabic word possibly derives from Aramaic ¿¿¿¿ kabbaba, which probably has its origins in Akkadian kababu meaning "to burn, char". The term was used in the Babylonian Talmud in discussion of Temple animal offerings that they not be kabbaba (burned). The Kurdish term kabab was adopted by medieval Arabs, and Turks as kebab. In the 14th century, kebab is defined to be synonymous with tabahajah, a Persian word for a dish of fried meat pieces. The Persian word was considered more high-toned in the medieval period. Kebab was used frequently in Persian books of that time to refer to meatballs made of ground or pounded chicken or lamb. In the modern period, kebab gained its current meaning of shish kebab, whereas earlier shiwa` ¿¿¿¿ had been the Arabic word for grilled meat. Kebab still retains its original meaning in the names for stew-like dishes such as tas kebab (bowl kebab). Similarly, kebab halla is an Egyptian dish of stewed beef and onions. The origin of kebab may lie in the short supply of cooking fuel in the Near East, which