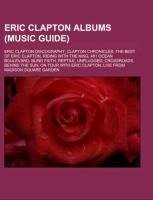 Source: Wikipedia. Commentary (music and lyrics not included). Pages: 34. Chapters: Eric Clapton discography, Clapton Chronicles: The Best of Eric Clapton, Riding with the King, 461 Ocean Boulevard, Blind Faith, Reptile, Unplugged, Crossroads, Behind the Sun, On Tour with Eric Clapton, Live from Madison Square Garden, Sonny Boy Williamson and The Yardbirds, August, Eric Clapton's Rainbow Concert, Crossroads 2: Live in the Seventies, Journeyman, Pilgrim, Blues, One More Car, One More Rider, Eric Clapton at His Best, Slowhand, The History of Eric Clapton, Me and Mr. Johnson, The Road to Escondido, From the Cradle, Live in Hyde Park, 24 Nights, Edge of Darkness, Back Home, Complete Clapton, The Cream of Clapton, Another Ticket, Money and Cigarettes, There's One in Every Crowd, Just One Night, Backless, No Reason to Cry, Guitar Boogie, Backtrackin', Time Pieces Vol.II Live in the Seventies, E. C. Was Here, The Cream of Eric Clapton, Time Pieces: The Best of Eric Clapton, Steppin' Out, Rush, Stages. Excerpt: The discography of Eric Clapton, a British guitarist and singer-songwriter, currently contains twenty studio albums, twenty-six singles, sixteen compilations, nine live albums and six soundtrack albums as a solo-artist and several collaborations on records between different artists. Before his career as a solo-artist, Clapton worked as a guitarist in several bands, including The Yardbirds 1963-65, John Mayall & the Bluesbreakers 1965-66, Cream 1966-68, Blind Faith 1968-69 and Derek and the Dominos 1970-71. Clapton decided to record as a solo-artist, after a less successful career as a band member. He released in 1970 his debut album Eric Clapton, which charted at number 17 in the US charts and at number 14 in the British charts. Four years later he released his second album 461 Ocean Boulevard, which received two gold certifications in the US and UK and peaked at number 1 in the US charts. His 1977 album, Slowhand, named after his nickname given by Giorgio Gomelsky, received three times Platinum in the United States. His most commercial recognized period was from 1989 through 2000, where his albums received at least five certifications and peaked in several countries in the top 10. On 27 September 2010 he released the album Clapton which peaked at number six in the US charts and number seven in the UK charts. Eric Clapton's best-selling album to date is the live album Unplugged, one of many albums in the "MTV Unplugged" series on MTV, in which musicians playing their songs on acoustic instruments. This album has sold more than ten million times in the United States alone. It's also one of the best-selling live album in the United States. 17147--85--17- 191851--50---- Format: LP206---60---- Notes -----US: Platinum Clapton is the 20th studio album by English blues-rock guitarist and singer-songwriter Eric Clapton. It was released on 27 September 2010 in the United Kingdom and the following day in the United States. The album is Clapton's first studio album in fou