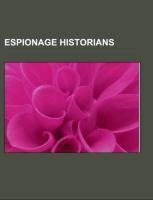 Source: Wikipedia. Pages: 28. Chapters: Historians of the Central Intelligence Agency, Philip Agee, Ronald Kessler, Robert Baer, James Bamford, Ari Ben-Menashe, Stansfield Turner, Peter Wright, Chris Ryan, Juval Aviv, Athan Theoharis, Victor Ostrovsky, Arnold Kramish, Ralph McGehee, Mark Riebling, Michael Howard, John Stockwell, Steve Coll, Stanislav Lunev, Omar Nasiri, Vasili Mitrokhin, Mikel Dunham, Victor Marchetti, Stephen Kinzer, Thomas Powers, John Earl Haynes, Harvey Klehr, Frank Snepp, Heinz Höhne, Chapman Pincher. Excerpt: Philip Burnett Franklin Agee (July 19, 1935 - January 7, 2008) was a Central Intelligence Agency (CIA) case officer and writer, best known as author of the 1975 book, Inside the Company: CIA Diary, detailing his experiences in the CIA. Agee joined the CIA in 1957, and over the following decade had postings in Washington, D.C., Ecuador, Uruguay and Mexico. After resigning from the Agency in 1968, he became a leading opponent of CIA practices. A co-founder of CovertAction Quarterly, he died in Cuba in January 2008. Agee was born in Tacoma, Florida. He graduated cum laude from the University of Notre Dame in 1956, and attended the University of Florida College of Law. Agee stated that his Roman Catholic social conscience had made him increasingly uncomfortable with his work by the late 1960s leading to his disillusionment with the CIA and its support for authoritarian governments across Latin America. He and other dissidents took encouragement in their stand from the Church Committee (1975-76), which cast a critical light on the role of the CIA in assassinations, domestic espionage, and other illegal activities. In the book Agee condemned the 1968 Tlatelolco massacre in Mexico City and wrote that this was the immediate event precipitating his leaving the agency. While Agee claimed that the CIA was "very pleased with his work", offered him "another promotion" and his superior "was startled" when Agee told him about his plans to resign, the anti-communist journalist John Barron claims that Agee's resignation was forced "for a variety of reasons, including his irresponsible drinking, continuous and vulgar propositioning of embassy wives, and inability to manage his finances". Agee was accused by U.S. President George H. W. Bush of being responsible for the death of Richard Welch, a Harvard-educated classicist who was murdered by the Revolutionary Organization 17 November while heading the CIA Station in Athens. Bush had directed the CIA from 1976 to 1977. Oleg Kalugin, fo