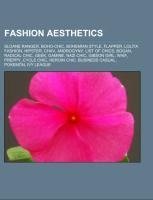 Source: Wikipedia. Pages: 52. Chapters: Sloane Ranger, Boho-chic, Bohemian style, Flapper, Lolita fashion, Hipster, Chav, Androgyny, List of chics, Bogan, Radical chic, Geek, Gamine, Nazi chic, Gibson Girl, Waif, Preppy, Cycle chic, Heroin chic, Business casual, Pokemón, Ivy League, Empire silhouette, Young Fogey, Shabby chic, Gouster, Anti-fashion, Flogger, Style tribe, Boyfriend, Clubwear, Size zero, Thrift store chic, Swenkas, Luxe Grunge, Wilderness chic, Dress clothes. Excerpt: Boho-chic is a style of female fashion drawing on various bohemian and hippie influences, which, at its height in 2004-5, was associated particularly with actress Sienna Miller and model Kate Moss in the United Kingdom and (as "bobo" chic) actresses Mary-Kate and Ashley Olsen and Nicole Richie in the United States. It has been seen since the early nineties and, although appearing to wane from time to time, has repeatedly re-surfaced in varying guises. Many elements of boho-chic became popular in the late 1960s and some date back much further, being associated, for example, with pre-Raphaelite women of the mid to late 19th century. Sherlock Holmes "upon the sofa in a purple dressing gown" in The Adventure of the Blue Carbuncle (Illustration by Sidney Padget, Strand Magazine, 1891) "Boho" is an abbreviation of bohemian. Vanessa Nicholson (granddaughter of Vanessa Bell, one of the pivotal figures of the unconventional, but influential "Bloomsbury Group" in the first half of the 20th century) has described it as a "curious slippery adjective". Although the original Bohemians were travellers or refugees from central Europe (the French bohémien translates as "Gypsy or Roma people"), the term has, as Nicholson noted, "attached itself to individuals as disparate as Jesus Christ, Shakespeare and Sherlock Holmes". The writer and historian A. N. Wilson remarked that, "in his dress-sense as in much else", Winston Churchill was "pre-First World War Bohemian", his unbleached linen suit causing surprise when he arrived in Canada in 1943. In Arthur Conan Doyle's first short story about Holmes for The Strand, Doctor Watson noted that the detective "loathed every form of society with his whole Bohemian soul" and "remained in our lodgings in Baker-street, buried among his old books and alternating from week to week between cocaine and ambition..". Designer Savannah Miller, elder sister of actress Sienna Miller, described a "real bohemian" as "someone who has the ability to appreciate