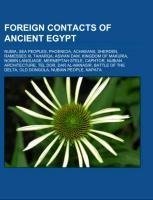 Source: Wikipedia. Pages: 68. Chapters: Nubia, Sea Peoples, Phoenicia, Achaeans, Sherden, Ramesses III, Taharqa, Aswan Dam, Kingdom of Makuria, Nobiin language, Merneptah Stele, Caphtor, Nubian architecture, Tel Dor, Dar al-Manasir, Battle of the Delta, Old Dongola, Nubian people, Napata, Battle of Djahy, Medjay, Alodia, Alashiya, Nubian pyramids, Tjeker, Temple of Dendur, Shasu, Kerma culture, Hamza El Din, Nubian languages, Baqt, Jebel Barkal, Nobatia, Qasr Ibrim, C-Group, Georgios I of Makuria, Historical names of Nubia, Akhraten, Faras, Denyen, List of rulers of Makuria, Lukka lands, Nekauba, Shorkaror, Lower Nubia, Semna, Arikhankharer, Al-Maris, Dotawo, Meryey, Abraham of Makuria, A-Group, Kyriakos of Makuria, Amanikhabale, Haggag Oddoul, Zacharias I of Makuria, Idanthyrsus, Salomo of Makuria, Merkurios of Makuria, Zacharias III of Makuria, Georgios II of Makuria, List of monarchs of Kerma, Phonen, Kissar, Markos of Makuria, Joel of Dotawo, Great Karnak Inscription, Rafael of Makuria, Simon of Makuria, Funj people, Saï, Kawa, Seheil, Ali Baba of Makuria, Nubiology, Batn-El-Hajar, Beder. Excerpt: The Sea Peoples were a confederacy of seafaring raiders of the second millennium BC who sailed into the eastern Mediterranean, caused political unrest, and attempted to enter or control Egyptian territory during the late 19th dynasty and especially during Year 8 of Ramesses III of the 20th Dynasty. The Egyptian Pharaoh Merneptah explicitly refers to them by the term "the foreign-countries (or 'peoples') of the sea" (Egyptian ) in his Great Karnak Inscription. Although some scholars believe that they invaded Cyprus, Hatti and the Levant, this hypothesis is disputed. The Late Bronze Age in the Aegean was characterized by the raiding of migratory peoples and their subsequent resettlement. The identity of the Sea Peoples has remained enigmatic to modern scholars, who have only the scattered records of ancient civilizations and archaeological analysis to inform them. Evidence shows that the identities and motives of these peoples were not unknown to the Egyptians. In fact, many had been subordinate to the Egyptians or in a diplomatic relationship with them for at least as long as the few centuries covered by the records. Some groups were not included in the Egyptian list of Sea Peoples, as they operated primarily on land. Among them were the 'prw (Habiru) of Egyptian inscriptions, or 'apiru of cuneiform ("bandits"). Sandars uses the analogous name "land peoples." Some people, such as the Lukka, were included in both categories. It has been suggested that one of the groups of Habiru were the Hebrews., but the modern scholarly conclusion is that "the plethora of attempts to relate apiru (Habiru) to the gentilic (i.e. biblical word) ibri are all nothing but wishful thinking." Select groups, or members of groups, were used as mercenaries by the Egyptians. Obelisk temple, ByblosThe earliest ethnic group later considered among the Sea Peoples is believed to be attested in Egyptian hieroglyphics on the Byblos obelisk found in the Obelisk Temple at Byblos in modern day Lebanon.