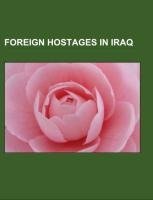 Source: Wikipedia. Pages: 32. Chapters: Kim Sun-il, Nick Berg, Jill Carroll, Margaret Hassan, Kenneth Bigley, Norman Kember, James Loney, Giuliana Sgrena, Douglas Wood, Ahmed Kousay Altaie, Susanne Osthoff, Tom Fox, Stephen Farrell, Fabrizio Quattrocchi, James Brandon, Shosei Koda, Harmeet Singh Sooden, Roy Hallums, Akihiko Saito, Enzo Baldoni, Ronald Alan Schulz, Ihab el-Sherif, Hostage Working Group, Jack Hensley, Sinan Krause, Kirk von Ackermann, Paul Taggart, Rory Carroll, Fairuz Yamulky, Rifat Mohammed Rifat, Marie Jeanne Ion, Florence Aubenas, Christian Chesnot, Issa Salomi, Georges Malbrunot, Fadi Ihsan Fadel, Murat Yuce, Ulf Hjertström. Excerpt: Beginning in April 2004, members of the Iraqi insurgency began taking foreign civilian hostages in Iraq. Since then, they have kidnapped more than 200 foreigners and thousands of Iraqis; among them, dozens of foreign hostages have been killed. Nepal (with 12) and the United States (with 11) rank the highest of hostages killed in Iraq. China ranks the highest (with 15) of hostages freed in Iraq followed by Pakistan (with 13) and Egypt (with 10). There are many motives behind these kidnappings. They include: In 2004, executions of captives were often filmed, and many were beheaded. However, the number of the recorded killings decreased significantly. Many hostages remain missing with no clue as to their whereabouts. The United States Department of State Hostage Working Group was organized by the U.S. Embassy, Baghdad, in the summer of 2004 to monitor foreign hostages in Iraq. The following is a list of known civilian foreign hostages in Iraq. Jill Carroll (born October 6, 1977) is an American former journalist (now working as a firefighter) who was kidnapped and ultimately released in Iraq. Carroll was a reporter for the Christian Science Monitor at the time of her kidnapping. After finishing a fellowship at Harvard University's Joan Shorenstein Center on the Press, Politics and Public Policy she returned to work for the Monitor. After her release, Carroll wrote a series of articles on her recollection of her experiences in Iraq. Carroll became an international cause célèbre when she was kidnapped in Baghdad on January 7, 2006. Carroll was freed on March 30, 2006. Carroll was reporting in Iraq for the Christian Science Monitor. She has also worked as a commentator for news networks such as MSNBC. She had been in Iraq since October 2003. Before covering the Middle East, Carroll was a reporting assistant in Washington, D.C., for the Wall Street Journal and worked for States News Service. According to an Associated Press report on August 9, 2006, U.S. Marines arrest