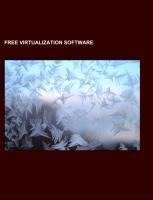 Source: Wikipedia. Pages: 24. Chapters: OpenJDK, QEMU, Xen, VirtualBox, OpenVZ, Free Java implementations, FreeBSD jail, Chroot, Kernel-based Virtual Machine, Cooperative Linux, Marionnet, OVPsim, Linux-VServer, User-mode Linux, VMware Server, XtratuM, Libvirt, Virtual Machine Manager, Libguestfs, ARMware, FreeVPS, Lguest, LXC, LynxSecure. Excerpt: OpenJDK (aka Open Java Development Kit) is a free and open source implementation of the Java programming language. It is the result of an effort Sun Microsystems began in 2006. The implementation is licensed under the GNU General Public License (GPL) with a linking exception, which exempts components of the Java class library from the GPL licensing terms. OpenJDK will become the official Java SE 7 reference implementation. Sun announced in JavaOne 2006 that Java would become open-source software, and on October 25, 2006, at the Oracle OpenWorld conference, Jonathan Schwartz said that the company intended to announce the open-sourcing of the core Java Platform within 30 to 60 days. Sun released the Java HotSpot virtual machine and compiler as free software under the GNU General Public License on November 13, 2006, with a promise that the rest of the JDK (which includes the Java Runtime Environment) would be placed under the GPL by March 2007, "except for a few components that Sun does not have the right to publish in source form under the GPL". According to free-software advocate Richard Stallman, this would end the "Java trap", the vendor lock-in that he argues applied to Java and programs written in Java. Software entrepreneur Mark Shuttleworth called the initial press announcement "A real milestone for the free software community". Following their promise to release a Java Development Kit (JDK) based almost completely on free and open source code in the first half of 2007 , Sun released the complete source code of the Java Class Library under the GPL on May 8, 2007, except for some limited parts that some third parties licensed to Sun that rejected the terms of the GPL. Included in the list of encumbered parts were several major components of the Java graphical user interface (GUI). Sun stated that it planned to replace the remaining proprietary components with alternative implementations and to make the class library completely free. On November 5, 2007, Red Hat