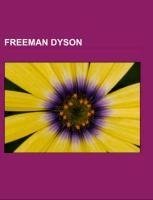 Source: Wikipedia. Pages: 36. Chapters: Astrochicken, Circular ensemble, Colonization of trans-Neptunian objects, Dyson's eternal intelligence, Dyson's transform, Dyson conjecture, Dyson series, Dyson sphere, Dyson spheres in popular culture, Dyson tree, Esther Dyson, George Dyson (composer), George Dyson (science historian), Gordon Freeman, Helios (propulsion system), Project Orion (nuclear propulsion), Quantum electrodynamics, Schwinger-Dyson equation, Space Studies Institute, Ted Taylor (physicist), TRIGA. Excerpt: Freeman John Dyson FRS (born December 15, 1923) is a British-born American theoretical physicist and mathematician, famous for his work in quantum electrodynamics, solid-state physics, astronomy and nuclear engineering. Dyson is a member of the Board of Sponsors of the Bulletin of the Atomic Scientists. Dyson has lived in Princeton, New Jersey, for over fifty years. Born at Crowthorne in Berkshire, Dyson was the son of the English composer George Dyson, who was later knighted. His mother had a law degree, but after Dyson was born she worked as a social worker. Although not known to be related to the early 20th century astronomer Frank Watson Dyson, as a small boy Dyson was aware of him and has credited the popularity of an astronomer sharing his surname as having helped to spark his own interest in science. From 1936 to 1941, Dyson was a Scholar at Winchester College, a leading boys' boarding school in Hampshire where his father was a schoolmaster teaching music. On 4 May 2011 he was received as one of twenty distinguished Old Wykehamists at the Ad Portas celebration, the highest honour that the College bestows. After Winchester he joined the operational research section of RAF Bomber Command, where he remained for the rest of the Second World War. He then proceeded to the University of Cambridge, where he obtained a Bachelor of Arts degree in mathematics. From 1946 to 1949 he was a Fellow of Trinity College, Cambridge, occupying rooms just below those of the philosopher Ludwig Wittgenstein, who would resign his professorship in 1947. In 1947 Dyson moved to the US, with a fellowship at Cornell University, where in 1951 he joined the faculty as a physics professor, although still lacking a doctorate. In 1953, he took up a post at the Institute for Advanced Study in Princeton, New Jersey. In 1957, he became a naturalized citizen of the United States and renounced his British nationality. One reason stated for this is that his children born in the US had not been recog