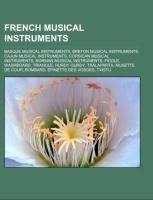 Source: Wikipedia. Pages: 31. Chapters: Basque musical instruments, Breton musical instruments, Cajun musical instruments, Corsican musical instruments, Norman musical instruments, Fiddle, Washboard, Triangle, Hurdy gurdy, Txalaparta, Musette de cour, Bombard, Epinette des Vosges, Txistu, Psalterium, Cajun accordion, Kirikoketa, Xirula, Trikitixa, Piston, French bagpipes, Alboka, Chabrette, Dulzaina, Biniou, Treujenn-gaol, Bladder fiddle, Cornemuse du Centre, Cabrette, Boha, Bodega, Veuze, Bousine, Musette bechonnet, Musette bressane, Pipasso, Graïle, Sourdeline, Loure, Samponha, Caramusa, Pifana. Excerpt: The hurdy gurdy or hurdy-gurdy (also known as a wheel fiddle) is a stringed musical instrument that produces sound by a crank-turned rosined wheel rubbing against the strings. The wheel functions much like a violin bow, and single notes played on the instrument sound similar to a violin. Melodies are played on a keyboard that presses tangents (small wedges, usually made of wood) against one or more of the strings to change their pitch. Like most other acoustic stringed instruments, it has a sound board to make the vibration of the strings audible. Most hurdy gurdies have multiple 'drone strings,' which provide a constant pitch accompaniment to the melody, resulting in a sound similar to that of bagpipes. For this reason, the hurdy gurdy is often used interchangeably with or along with bagpipes, particularly in French and contemporary Hungarian folk music. Many folk music festivals in Europe feature music groups with hurdy gurdy players, but the most famous annual festival is at Saint-Chartier, in the Indre département, in central France, during the week nearest July 14 (Bastille Day). Elders playing an organistrumSantiago de Compostela, Galicia The hurdy gurdy is generally thought to have originated from fiddles in either Western Europe or the Middle East (e.g. rebab) some time prior to the eleventh century A.D. The first recorded reference to fiddles in Europe was in the 9th century by the Persian geographer Ibn Khurradadhbih (d. 911) describing the lira (lura) as a typical instrument within the Byzantine Empire. One of the earliest forms of the hurdy gurdy was the organistrum, a large instrument with a guitar-shaped body and a long neck in which the keys were set (covering one diatonic octave). The organistrum had a single melody string and two drone strings, which ran over a common bridge and a relatively small wheel. Due to its size, the organistrum was played by two people, one of whom turned the crank while the other pulled the keys upward. Pulling keys upward