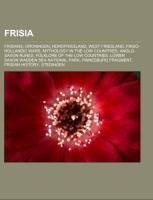 Source: Wikipedia. Pages: 52. Chapters: Frisians, Groningen, Nordfriesland, West Friesland, Friso-Hollandic Wars, Mythology in the Low Countries, Anglo-Saxon runes, Folklore of the Low Countries, Lower Saxon Wadden Sea National Park, Finnesburg Fragment, Frisian history, Stedingen, Schleswig-Holstein Wadden Sea National Park, East Frisian peninsula, Frisian Kingdom, Frisian participation in the Crusades, Frisiavones, Redbad, King of the Frisians, Gulf house, Frisii, Ried fan de Fryske Beweging, Uthland-Frisian house, Saterland Frisians, Artificial dwelling hill, Eala Frya Fresena, Walle Plough, Groep fan Auwerk, Old Frisian given names, Battle of the Boarn, Battle of Finnburg, Frisian American, German Bight, North Frisia, Battle of Dorestad, Eidum, Jümme, Frise, Jeverland, Westfriese Omringdijk, Thiadsvind, Wangerooge Frisian, Frisian eagle, Old Frisian farmhouse, Emo of Friesland. Excerpt: The Friso-Hollandic Wars, also called Frisian-Hollandic Wars (Dutch: ), were a series of short medieval wars (ranging from single battles to entire campaigns) consisting of the attempts made by the counts of Holland to conquer the free Frisian territories, which lay to the north and east of their domain. These wars raged with (large) intervals from 1256 to 1289, 1296 to 1299, and from 1345 to 1422, although it could be argued that a state of war continued to exist between the County of Holland and the Frisian territories till well after the year 1500. The Frisians were at that time unique in Europe in that they did not adhere to the feudal system. In fact, since the time the Frisian territories had been part of the Frankish empire of Charlemagne, they had drifted away from mainstream European culture on a separate course, similar to that of the Swiss Confederation. Among the Frisians egalitarianism was such, that no noble class started to develop until the late thirteenth century, and even then these "nobles" seem to have only been firsts among equals, with only as much power as they could grab and hold on to, instead of being granted such power by a liege lord. These "nobles" were called chieftains (Dutch: hoofdelingen; Frisian: haadlingen). The so-called Frisian freedom took the place of the feudal system in Frisian society. According to the myth, Charlemagne had granted the Frisians their freedom, that is to say: freedom from any and every lord excepting the Holy Roman emperor. They even produced a fake charter to prove this, though such fraud was, apparently, not at all uncommon in those days. In an age when feudalism was embedded in religion (every man has a lord above him, the top of this pinnacle being God), this freedom, which was seen as a sort of anarchy, or worse, a rebellion against God's will, scandalised the rest of Europe. The Frisian lands in those days stretched along a good part of the North Sea coast, including West-Friesland (the northern part of