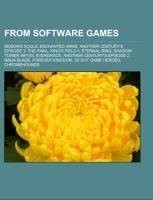 Source: Wikipedia. Pages: 36. Chapters: Demon's Souls, Enchanted Arms, Another Century's Episode 3: The Final, King's Field II, Eternal Ring, Shadow Tower Abyss, Evergrace, Another Century's Episode 2, Ninja Blade, Forever Kingdom, 3D Dot Game Heroes, Chromehounds, Otogi 2: Immortal Warriors, King's Field III, Lost Kingdoms, Metal Wolf Chaos, Kuon, King's Field IV, Dark Souls, Echo Night: Beyond, The Adventures of Cookie & Cream, Lost Kingdoms II, Otogi: Myth of Demons, Steel Battalion: Heavy Armor. Excerpt: Demon's Souls Demonzu Soru) is an action role-playing game video game developed primarily by From Software (with assistance from SCE Japan Studio) exclusively for the PlayStation 3. It was released in Japan on February 5, 2009 and published by Sony Computer Entertainment. In North America it was released on October 6, 2009 and published by Atlus while in Europe it was released on June 25, 2010 and published by Namco Bandai Games. Set in a dark fantasy world, players take control of a custom hero who has journeyed to the fictional kingdom of Boletaria, which is being ravaged by an accursed fog that brings forth demons that feast on the souls of mortals. The game has been described as a spiritual successor to the King's Field series, a previous series of games from the same developer. The gameplay involves a character creation system with emphasis on gathering loot through combat with enemies in a non-linear series of varied locations. It also has a unique online multiplayer system integrated into the single-player where players can leave useful messages and warnings for other players' game worlds. Upon its release in Japan and North America, Demon's Souls was met with a positive response from critics, winning numerous awards. Praised for its dark fantasy art design, variation in combat choice and integrated online multiplayer, the game is particularly notable for its high difficulty level with many critics noting it as a genuine challenge. The player confronting a red dragon. The light tint around the player character indicates that they have previously died resulting in a cut health bar and stronger foes.Players take control of the main character in a third-person view who, at the start of the game, can be customized in their gender, appearance, name and starting class. There are 10 starting classes ranging from knights and barbarians to thieves and mages, each with their own set of statistics, starting gear, weapons and type of magic used that emphasize certain app