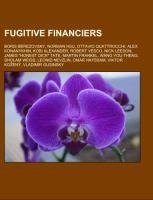 Source: Wikipedia. Pages: 28. Chapters: Boris Berezovsky, Norman Hsu, Ottavio Quattrocchi, Alex Konanykhin, Kobi Alexander, Robert Vesco, Nick Leeson, James "Honest Dick" Tate, Martin Frankel, Wang You-theng, Sholam Weiss, Leonid Nevzlin, Omar Hayssam, Viktor Kozený, Vladimir Gusinsky, Peter Tham, Samuel Israel III, The World's 10 Most Wanted, Pincus Green, Tomo Razmilovic. Excerpt: Boris Abramovich Berezovsky (Russian: ) is a Russian businessman, mathematician, member of Russian Academy of Sciences and a former Russian official and MP. He is also known as a Russian oligarch, controversial politician and power broker during the presidency of Boris Yeltsin in the 1990s. Berezovsky was at the height of his power in the later Yeltsin years, when he was deputy secretary of Russia's security council. Berezovsky made his fortune during Russia's privatisation of its nationalised companies. He took ownership of the Sibneft oil company and became the main shareholder in the country's main television channel, ORT, which supported Boris Yeltsin in the run-up to the 1996 presidential election. In 1997 Forbes Magazine estimated Berezovsky to be worth $3 billion. He helped fund the party that formed Vladimir Putin's parliamentary base and was elected to the Duma on Putin's slate. Following the ascent of Putin to the Russian presidency, Berezovsky went into opposition and resigned from the Duma. In the end of 2000 he left the country and was later granted political asylum in the United Kingdom. He has since publicly stated that he is on a mission to bring down Putin "by force". In the UK, he became associated with Akhmed Zakayev, Alexander Litvinenko and Alex Goldfarb in what has become known as "the London Circle" of Russian exiles. He is a founder of International Foundation for Civil Liberties. After emigration Berezovsky was convicted of economic crimes in absentia. Russia has repeatedly failed to obtain his extradition from Britain, which has become a major point of diplomatic tension between the two countries. Berezovsky was born in 1946 in Moscow to Abram Markovich Berezovsky, a Jewish civil engineer in construction works, and his wife Anna Gelman. He studied forestry and then applied mathematics, receiving his doctorate in 1983. After graduating from the Moscow Forestry Engineering Institute in 1968, Berezovsky worked as an engineer, from 1969 till 19

The 33 Strategies of War