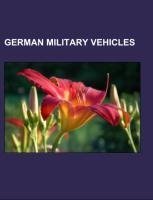 Source: Wikipedia. Pages: 38. Chapters: Unimog, Mercedes-Benz G-Class, M113 armored personnel carrier, List of World War II military vehicles of Germany, M270 Multiple Launch Rocket System, List of Sd.Kfz. designations, Volkswagen 181, Fennek, Volkswagen Iltis, TH-495, MOWAG Eagle, KMW Grizzly, AGF, Mungo ESK, LAPV Enok, SLT 50 Elefant, DKW Munga, List of currently active German military land vehicles, List of currently active German military watercraft, List of currently active German military aircraft, List of currently active German military helicopters. Excerpt: The Mercedes-Benz G-Class or G-Wagen, short for Geländewagen (or cross-country vehicle), is a four-wheel drive vehicle / sport utility vehicle (SUV) produced by German automaker Mercedes-Benz. The G-wagen is characterized by its boxy styling and body-on-frame construction. It utilizes three fully locking differentials, one of the few vehicles to have such a feature. The G-class was developed as a military vehicle and offered as a civilian version in 1979. The G-class replaced the cheaper Volkswagen Iltis in 1990. In this role it is sometimes referred to as the "Wolf" and LAPV Enok. The G-Class has been sold under the Puch name in certain markets, and the Peugeot P4 is a variant made under license, with a Peugeot engine and different parts. Despite the introduction of an intended replacement, the unibody crossover SUV Mercedes-Benz GL-Class in 2006, the G-Class is still produced and is expected to continue in production. An interior face lift is possibly in the works for the G-Class, so there is no set date for when this car will cease production. The G-Wagen was developed by Steyr-Daimler-Puch and first offered for sale in 1979 and redesigned in 1990/1991. A new version was expected for 2007, but the new GL-Class will not replace the G-Wagen, and it will continue to be hand-built in Graz, Austria at an annual production of 4,000 to 6,000 units. In February 2009, Magna Steyr, an operating unit of Magna International, announced that it signed an agreement with Daimler AG to extend the production of the Mercedes-Benz G-Class at Magna Steyr in Graz, Austria until 2015. Besides the production, the further development of the G-Class by Mercedes-Benz is also located in Graz since 1992. The G-Wagen is the longest produced Mercedes Benz in Daimler's history, with a span of 32 years. 1972 Development stars, focusing on off road abilities and maximum safety and comfort; with a cooperative agreement between Daimler-Benz and Steyr-Daimler-Puch in Graz, Austria. Mercedes-Benz eng