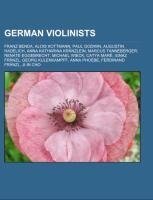 Source: Wikipedia. Pages: 28. Chapters: Franz Benda, Alois Kottmann, Paul Godwin, Augustin Hadelich, Anna Katharina Kränzlein, Marcus Tanneberger, Renate Eggebrecht, Michael Wieck, Catya Maré, Ignaz Fränzl, Georg Kulenkampff, Anna Phoebe, Ferdinand Fränzl, Ji-In Cho, Johann Georg Pisendel, Vesna Stefanovich-Gruppman, Johann Vierdanck, Maximilian C. Jehuda Ewert, Ferdinand David, Frederic Ernest Fesca, Saschko Gawriloff, Carl Ferdinand Becker, Michael Mann, Andreas Romberg, Helmut Zacharias, Philip A. Herfort, Jean Becker, Friedrich Christian Hermann Uber, Thomas Brandis, Michael Karoli, Christoph Koncz, Walter Levin, Valentin Gregor, Alexander Ritter, Richard Barth, Johann Adam Birkenstock, Leopold August Abel, Johann Fischer, Hubert Buchberger, Carl Eberwein, Anton Ferdinand Titz, Franz Anton Ries, Joseph Kreutzer, Karl Wendling, Wilhelm Melcher, Karl Schröder I, Johann Wilde, Marianne Scharwenka, Stefan Krah. Excerpt: Franz Benda (Czech: ) (baptised 22 November 1709 - 7 March 1786) was a Czech violinist and composer. He was the brother of Jirí Antonín Benda, and he worked for much of his life at the court of Frederick the Great. Benda was born in Bohemia at the town of Staré Benátky. Benda himself claimed to have been born 25 November, but baptism records show he was baptised three days earlier, on 22 November. His actual date of birth seems not to have been recorded, but it was probably no more than a day or two earlier than 22 November. Benda became the founder of a German school of violin playing. In his youth he was a chorister at Prague and afterward in the Chapel Royal at Dresden. At the same time he began to study the violin, and soon joined a company of strolling musicians who attended fetes, fairs, etc. At eighteen years of age Benda abandoned this wandering life and returned to Prague, going thence to Vienna, where he pursued his study of the violin under Carl Heinrich Graun, a pupil of Tartini. After two years he was appointed chapel master at Warsaw. In 1732, he entered the service of Frederick the Great, then prince royal of Prussia, with whom he remained the rest of his life. He was a member of the prince royal's band, and later became concertmaster to the king. He played about 50,000 concertos over a period of forty years. Benda was a master of all the difficulties of violin playing, and the rapidity of his execution and the mellow sweetness of his highest notes were unequalled. He had many pupils and wrote a number of works, chiefly exercises and studies for the violin. Benda's daughter Juliane Reichardt (1752-1783) and his granddaughter Louise Reichardt (1779-1826) were also composers. More recently there was a FrantiSek Benda who was a composer of film scores and other works during the 20th century. The Benda Chamber Orchestra carrying and honoring the name of the Benda musicians family, was founded in 1956 in Ústí nad Labem, North Bohemia, Czech Republic. Symph