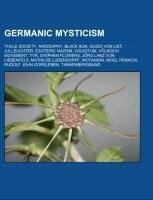 Source: Wikipedia. Pages: 39. Chapters: Thule Society, Ariosophy, Black Sun, Guido von List, Julleuchter, Esoteric Nazism, Volkstum, Völkisch movement, Tyr, Stephen Flowers, Jörg Lanz von Liebenfels, Mathilde Ludendorff, Wotanism, Nigel Pennick, Rudolf John Gorsleben, Tannenbergbund, Friedrich Wannieck, Landig Group, German Faith Movement, Artgemeinschaft, Peryt Shou, Philipp Stauff, Wilfried Daim. Excerpt: Armanism and Ariosophy are the names of ideological systems of an esoteric nature, pioneered by Guido von List and Jörg Lanz von Liebenfels respectively, in Austria between 1890 and 1930. List also used the name Wotanism, whereas Lanz also used the names Theozoology and Ario-Christianity. The two authors inspired numerous others and a variety of organizations in Germany and Austria of that time. This article follows the historian Goodrick-Clarke in summarizing these developments under the term Ariosophy, although this broader use of the word is retrospective and was not generally current among the esotericists themselves. They were part of a general occult revival in Austria and Germany of the late 19th and early 20th centuries, loosely inspired by historical Germanic paganism and traditional concepts of occultism, and related to German romanticism. The connection of this Germanic mysticism with historical Germanic culture, though tenuous, is evident in the mystics' fascination with runes, in the form of List's Armanen runes. Ideology regarding the Aryan race (in the sense of Indo-Europeans, though with Germanic peoples being viewed as their purest representatives), runic symbols, the swastika, and occultism are important elements in Ariosophy. From around 1900 onwards, these ariosophic ideas (together with, and influenced by, Theosophy) contributed significantly to an occult counterculture in Germany and Austria. A historic interest in this topic has stemmed from the ideological relation of Ariosophy to Nazism, and is obvious in such book titles as: However, Goodrick-Clarke's comprehensive study finds little evidence of direct influence, except in the case of the highly idiosyncratic ancient-German mythos elaborated by the 'clairvoyant' (but in fact schizophrenic) SS-Brigadeführer Karl Maria Wiligut, of which the practical consequences were, first, the incorporation of Wiligut's symbolism into the ceremonies of an elite circle within the SS; and, secondly, the offi