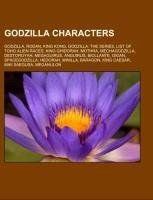 Source: Wikipedia. Pages: 55. Chapters: Godzilla, Rodan, King Kong, Godzilla: The Series, List of Toho alien races, King Ghidorah, Mothra, Mechagodzilla, Destoroyah, Megaguirus, Anguirus, Biollante, Gigan, SpaceGodzilla, Hedorah, Minilla, Baragon, King Caesar, Miki Saegusa, Meganulon, Varan, Battra, Godzilla Junior, Moguera, Titanosaurus, Kumonga, Steve Martin, Ebirah, Manda, Gorosaurus, Jet Jaguar, Kamacuras. Excerpt: King Kong is a fictional character that has appeared in several movies since 1933. These include the groundbreaking 1933 movie, the film remakes of 1976 and 2005, as well as various sequels of the first two films. The character has become one of the world's most famous movie icons and, as such, has transcended the medium, appearing or being parodied in other works outside of films, such as a cartoon series, books, comics, various merchandise and paraphernalia, video games, theme park rides, and even an upcoming stage play. His role in the different narratives varies, ranging from a rampaging monster to a tragic antihero. The rights to the character are currently held by Universal Studios, with limited rights held by the estate of Merian C. Cooper, and perhaps certain rights in the public domain (see below). A World War I anti-German propaganda poster (ca. 1917) featuring a monster similar to King Kong.The King Kong character was conceived and created by U.S. filmmaker Merian C. Cooper. In the original film, the character's name is Kong, a name given to him by the inhabitants of "Skull Island" in the Pacific Ocean, where Kong lives along with other over-sized animals such as a plesiosaur, pterosaurs, and dinosaurs. An American film crew, led by Carl Denham, captures Kong and takes him to New York City to be exhibited as the "Eighth Wonder of the World". Kong escapes and climbs the Empire State Building (the World Trade Center in the 1976 remake), where he is eventually shot and killed by aircraft. Nevertheless, as Denham comments, "It was beauty killed the beast," for he climbs the building in the first place only in an attempt to protect Ann Darrow, an actress originally offered up to Kong as a sacrifice (in the 1976 remake, the character is named Dwan). A mockumentary about Skull Island that appears on the DVD for the 2005 remake (but originally seen on the Sci-Fi Channel at the time of its theatrical release) gives Kong's scientific name as Megaprimatus kong, and