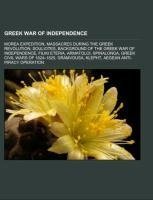 Source: Wikipedia. Pages: 55. Chapters: Morea expedition, Massacres during the Greek Revolution, Souliotes, Background of the Greek War of Independence, Filiki Eteria, Armatoloi, Spinalonga, Greek civil wars of 1824-1825, Gramvousa, Klepht, Aegean Anti-Piracy Operation, First Hellenic Republic, Agia Lavra, Tatarna Bridge, Areopagus of Eastern Continental Greece, Elafonisi, Koufonisi, Crete, Treaty of Adrianople, Sacred Band, Kissamos, Treaty of Constantinople, Third National Assembly at Troezen, Senate of Western Continental Greece, Dragasani, Ellinoglosso Xenodocheio, First National Assembly at Epidaurus, Bouboulina, Greece on the Ruins of Missolonghi, Hellas, Second National Assembly at Astros, Treaty of London, Fifth National Assembly at Nafplion, Fourth National Assembly at Argos, Propylaea, Kastania, Laconia, Liakos Liakopoulos, Kasos massacre, Greek local statutes. Excerpt: The Greek War of Independence, also known as the Greek Revolution (Greek: ; Ottoman: ¿¿¿¿¿ ¿¿¿¿¿¿ Yunan Isyani) was a successful war of independence waged by the Greek revolutionaries between 1821 and 1832, with later assistance from several European powers, Russia, United Kingdom and France against the Ottoman Empire, who were assisted by their vassals, the Eyalet of Egypt and partly the Vilayet of Tunisia. Following the fall of the Byzantine Empire to the Ottoman Empire, most of Greece came under Ottoman rule. During this time, there were frequent revolts by Greeks attempting to gain independence. In 1814, a secret organization called the Filiki Eteria was founded with the aim of liberating Greece. The Filiki Eteria planned to launch revolts in the Peloponnese, the Danubian Principalities and Constantinople. The first of these revolts began on 6 March 1821 in the Danubian Principalities, but it was soon put down by the Ottomans. The events in the north urged the Greeks in the Peloponnese in action and on 17 March 1821 the Maniots declared war on the Ottomans. By the end of the month, the Peloponnese was in open revolt against the Turks and by October 1821 the Greeks under Theodoros Kolokotronis had captured Tripolitsa. The Peloponnesian revolt was quickly followed by revolts in Crete, Macedonia and Central Greece, which would soon be suppressed. Meanwhile, the makeshift Greek navy was achieving success against the Ottoman navy in the Aegean Sea and prevented Ottoman reinforcements from arriving by sea. Tensions soon developed among different Greek factions, leading to two consecutive civil wars. Meanwhile, the Ottoman Sultan negotiated with Mehmet Ali of Egypt, who agreed to send his son Ibrahim Pasha to Greece with an army to suppress the revolt in return for territorial gain. Ibrahim landed in the Peloponnese in February 1825 and had immediate success: by the end of 1825, most of the Peloponnese was under Egyptian control, and the city of Missolonghi-put under s