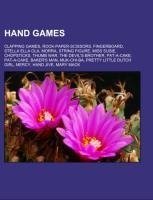 Source: Wikipedia. Pages: 29. Chapters: Clapping games, Rock-paper-scissors, Fingerboard, Stella Ella Ola, Morra, String figure, Miss Susie, Chopsticks, Thumb war, The Devil's Brother, Pat-a-cake, pat-a-cake, baker's man, Muk-chi-ba, Pretty Little Dutch Girl, Mercy, Hand jive, Mary Mack, Thumb twiddling, Spellbinder, Red Hands, Down Down Baby, Johnny Whoop, Knife game, Rock-paper-scissors-lizard-spock, Slapboxing, Stick gambling, I've got your nose, USA Rock Paper Scissors League, Nontransitive game, Saa Boo Three, Kuma ken, Hand game, Roller coaster. Excerpt: Rock-paper-scissors is a hand game played by two or more people. The game is known by many names, including other orderings of the three items in the name (with "stone" often substituted by speakers of British English), piedra papel o tijera, fargling, cachi-pún, burung-batu-air ("bird-stone-water"), jan-ken-pon (and variants including jan-ken-poi and janken), baau-jin-dup (Cantonese: "wrap-cut-crash"), kauwi-bauwi-bo (Korean: "scissors-rock-cloth"), ¿¿¿¿¿¿-¿¿¿¿¿¿¿-¿¿¿¿¿¿ and rochambeau. The game is often used as a selection method in a way similar to coin flipping, drawing straws, or throwing dice. However, unlike truly random selection methods, rock-paper-scissors can be played with a degree of skill, especially if the game extends over many sessions with the same players; it is often possible to recognize and exploit the non-random behavior of an opponent. The players count aloud to three, or speak the name of the game (e.g. "Rock Paper Scissors!" or "Ro! Cham! Beau!"), each time raising one hand in a fist and swinging it down on the count. After the third count (saying, "Scissors!" or "Beau!"), the players change their hands into one of three gestures, which they then "throw" by extending it towards their opponent. Variations include a version where players use a fourth count - "Shoot!" - before throwing their gesture, or a version where they only shake their hands twice before "throwing." Others prefer a five count cadence by saying "Says Shoot!" or "And Shoot!" before throwing their gesture. The gestures are: The objective is to select a gesture which defeats that of the opponent. Gestures are resolved as follows: If both players choose the same gesture, the game is tied and the players throw again. Players have developed numerous cultural and personal variations on the game, from simply playing the same game with different objects, to expanding into more weapons and rules. With an odd number of choices, each beats half the weapons and loses to half the weapon