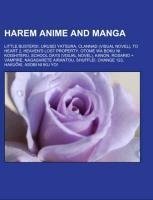 Source: Wikipedia. Pages: 180. Chapters: Little Busters!, Urusei Yatsura, Clannad (visual novel), To Heart 2, Heaven's Lost Property, Otome wa Boku ni Koishiteru, School Days (visual novel), Kanon, Rosario + Vampire, Nagasarete Airantou, Shuffle!, Change 123, Hakuoki, Asobi ni iku yo!, Love Hina, High School DxD, Girls Bravo, Mashiroiro Symphony, IS (Infinite Stratos), Kore wa Zombie Desu ka?, Alice in the Country of Hearts, Tenchi Muyo! War on Geminar, Aria the Scarlet Ammo, Negima! Magister Negi Magi, Oh My Goddess!, Lotte no Omocha!, Dual! Parallel Trouble Adventure, Tayutama: Kiss on my Deity, Rental Magica. Excerpt: Little Busters! Ritoru Basutazu!) is a Japanese visual novel developed by Key. It was released on July 27, 2007 playable on Windows PCs and is rated for all ages. Little Busters! is Key's sixth game, along with other titles such as Kanon, Air, and Clannad. An adult version of the game titled Little Busters! Ecstasy was released on July 25, 2008 for Windows, unlike Kanon and Air, which were first released with adult content and then had later versions with such content removed. Ecstasy was later ported to the PlayStation 2, PlayStation Portable, PlayStation Vita, and PlayStation 3. The story follows the life of Riki Naoe, a high school student who has been a member of a group of friends named the Little Busters since childhood. Riki brings multiple girls at his school into the Little Busters to have enough people to play a baseball game. The gameplay in Little Busters! follows a branching plot line which offers pre-determined scenarios with courses of interaction, and focuses on the appeal of the six female main characters by the player character, which increases to nine in Ecstasy. There are additional minigames added into the gameplay, such as battle sequences that resemble fighting games or baseball batting practice, which serve to give the characters experience, obtain accessories to use during battle, and improve their statistics. Both Little Busters! and Ecstasy ranked as the best-selling PC game sold in Japan for the time of their release, and Ecstasy would go on to sell over 100,000 units. Key went on to produce an adult spin-off of Ecstasy called Kud Wafter in June 2010, which expanded on the scenario of Kudryavka Noumi, one of the heroines from Little Busters! and Ecstasy. There have been 13 manga adaptations based on Little Busters! and Ecstasy published by ASCII Media Works, Kadokawa Shoten and Ichijinsha. Comic anthologies, light novels and art books were also published, as were several music albums. There have been two Internet radio shows hosted by the