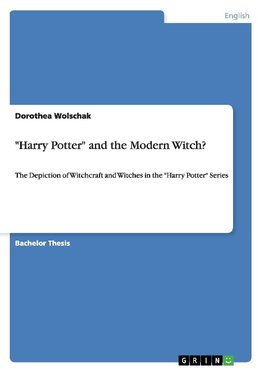 "Harry Potter" and the Modern Witch?

Bachelor Thesis from the year 2013 in the subject English Language and Literature Studies - Literature, grade: 2,3, Catholic University Eichstätt-Ingolstadt, language: English, abstract: 'Tell me one last thing' said Harry. Is this real? Or has this been... Viac o knihe

Bachelor Thesis from the year 2013 in the subject English Language and Literature Studies - Literature, grade: 2,3, Catholic University Eichstätt-Ingolstadt, language: English, abstract: 'Tell me one last thing' said Harry. Is this real? Or has this been happening inside my head?' [...] 'Of course it is happening inside your head, Harry, but why on earth should that mean that it is not real?'

While some people devour the books enthusiastically, others despise and would rather burn them. But whatever people think about the Harry Potter series' social, educational or literary value, they can hardly dismiss them. Harry Potter is a phenomenon worth examining. It is not only the destiny of that shy little boy with his lighting-bolt scar on his forehead that triggered the "Harrycane", but also the appeal of the magical world of witchcraft.
For centuries, witchcraft is the object of research for various scholars of literature, history, theology, arts, folklore, anthropology, medicine and law. To analyse historical witchcraft, they access preserved spell books, court records, administrative correspondences, pamphlets, penitentials, sermons and art works.
Due to stereotypisation processes, there is a gap between the popular and academic knowledge of witchcraft. While academics rather refer to the historical witch who supposedly threatened the Church and the State since the Middle Ages and was persecuted in the Early Modern Age, laymen rather associate the witch with pictures they conceive from popular literature: the fairy tale image of an old, crook-backed, evil women who lures children into her gingerbread house and eats them. How has the image of the supposedly "single greatest threat to Christian European civilization" changed during the Modern Times?
Since the first volume was published, scholars from various fields have approached the Harry Potter phenomenon. The main topics of research