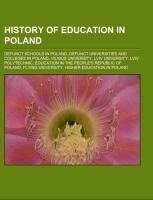 History of education in Poland

Source: Wikipedia. Pages: 33. Chapters: Defunct schools in Poland, Defunct universities and colleges in Poland, Vilnius University, Lviv University, Lviv Polytechnic, Education in the People's Republic of Poland, Flying University, Higher education in Poland, Education in Poland during World War II, Academic Gymnasium Danzig, Commission of National Education, Zamojski Academy, Collegium Hosianum, Secret Teaching Organization, Liceum Krzemienieckie, Collegium Nobilium, Scottish Café, Baworowscy Library, Corps of Cadets, Lwów School of Mathematics, Lwów-Warsaw school of logic, Sejny Priest Seminary, Polish School of Mathematics, Lubranski Academy, Society for Elementary Books, Warsaw School of Mathematics, Kraków School of Mathematics, Kraków School of Mathematics and Astrology, Dzerzhinsky Political-Military Academy in Warsaw, Askenazy school, Medical Academy of Lódz. Excerpt: Vilnius University (Lithuanian: ; other names exist) is the oldest university in the Baltic states and one of the oldest in North Eastern Europe. It is also the largest university in Lithuania. The university was founded in 1579 as the Jesuit Academy (College) of Vilnius (Vilna, Wilno). It was the third oldest university in the Polish-Lithuanian Commonwealth. Soon after the partitions of the Polish-Lithuanian Commonwealth, it was forced to suspend its operation in the aftermath of the November Uprising (from 1832 to 1919). In the aftermath of World War I the University saw failed attempts to restart it by Lithuania (December 1918) and invading Soviet forces (March 1919), and finally resumed operations as the University of Stefan Batory in Poland (August 1918), a period followed by another short Soviet occupation in 1920, and the less than two year period of the Republic of Central Lithuania, annexed by Poland in 1922. Following Soviet invasion of Poland in September 1939, the University was briefly administered by the Lithuanian authorities (from October 1939), and then after Soviet annexation of Lithuania (June 1940), punctuated by a period of German occupation after German invasion of the Soviet Union (1941-1944), administrated as Vilnius State University by of the Lithuanian Soviet Socialist Republic. After Lithuania regained its independence in 1990, following the dissolution of the Soviet Union, it resumed its status as one of the prominent universities in Lithuania as Vilnius University. The university has been known by various names during its history. Due to its long history of Jewish, Polish and Russian influence or rule, the city portion of its name is variously rendered as Vilna (Russian), Wilna (German) or Wilno (Polish), in addition to the modern Lithuanian Vilnius (see History of Vilnius). Since 1990: Vilnius University The Grand Courtyard of Vilnius University and the Church of St. John., Jan Kazimierz Wilczynski, drawing, circa 1850In 1568, the Lithu