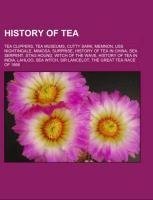 Source: Wikipedia. Pages: 33. Chapters: Tea clippers, Tea museums, Cutty Sark, Memnon, USS Nightingale, Mimosa, Surprise, History of tea in China, Sea Serpent, Stag Hound, Witch of the Wave, History of tea in India, Lahloo, Sea Witch, Sir Lancelot, The Great Tea Race of 1866, History of tea in Russia, Thermopylae, Houqua, Fiery Cross, Comet, History of tea in Japan, Lothair, Lammermuir, Ariel, Challenger, Leander, Serica, Hallowe'en, Maokong, Ambassador, Bramah Tea and Coffee Museum, Taipei Story House, Tenfu Tea Museum, Pinglin Tea Industry Museum, Twinings Museum, Commutation Act, China National Tea Museum. Excerpt: The history of tea is long and complex, spreading across multiple cultures over the span of thousands of years. Although tales exist in regards to the beginnings of tea being used as a beverage, no one is sure of its exact physical and cultural origins. According to Mondal (2007, p. 519): "Camellia sinensis originated in southeast Asia, specifically around the intersection of latitude 29°N and longitude 98°E, the point of confluence of the lands of northeast India, north Burma, southwest China and Tibet. The plant was introduced to more than 52 countries, from this 'centre of origin'." Based on morphological differences between the Assamese and Chinese varieties, botanists have long asserted a dual botanical origin for tea; however, statistical cluster analysis, the same chromosome number (2n=30), easy hybridization, and various types of intermediate hybrids and spontaneous polyploids all appear to demonstrate a single place of origin for Camellia sinensis - the area including the northern part of Burma, and Yunnan and Sichuan provinces of China. According to this theory, tea plants in southeast Asia may have been the products of the 19th century and 20th century hybridizing experiments. Yunnan Province has also been identified as "the birthplace of tea...the first area where humans figured out that eating tea leaves or brewing a cup could be pleasant." Fengqing County in the Lincang City Prefecture of Yunnan Province in China is said to be home to the world's oldest cultivated tea tree, some 3,200 years old. In one popular Chinese legend, Shennong, the legendary Emperor of China and inventor of agriculture and Chinese medicine was drinking a bowl of just boiled water some time around 2737 BC when a few leaves were blown from a nearby tree into his water, changing the color. The emperor took a sip of the brew and was pleasantly surprised by its flavor and restorative properties. A variant of the legend tells that the emperor tested the medical properties of various he