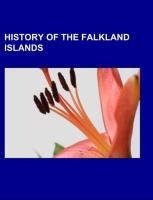 History of the Falkland Islands

Source: Wikipedia. Pages: 57. Chapters: Ajax Bay, Antonio Rivero, Arana-Southern Treaty, Aurora Islands, Battle of the Falkland Islands, Bold Cove, Brewster-Sanford Expedition, British Nationality (Falkland Islands) Act 1983, Cape Pembroke, Capture of Port Egmont, David Jewett, Doveton Sturdee, Falklands Crisis (1770), Falklands Expedition, Falkland Islands Dependencies, Falkland Islands wolf, Government House (Falkland Islands), Green Patch, Hope Place, James Bartley, Listed buildings in the Falkland Islands, Moody Brook, Operation Journeyman, Operation Tabarin, Origins of Falkland Islanders, Pepys Island, Port Albemarle, Port Louis, Falkland Islands, Puerto Soledad, Re-establishment of British rule on the Falkland Islands, Sinking of the Chian-der 3, Thomas Bridges (Anglican missionary), Timeline of the history of the Falkland Islands. Excerpt: The history of the Falkland Islands (Spanish: ) goes back at least five hundred years, with active exploration and colonisation only taking place in the 18th century. Nonetheless, the islands have been a matter of controversy, as they have been claimed by the French, British, Spaniards and Argentines at various points. The extinct warrah is sometimes taken as evidence of pre-European discovery.While Amerindians from Patagonia could have visited the Falklands, the islands were uninhabited when discovered by Europeans. Recent discoveries of arrowheads in Lafonia (on the southern half of East Falkland) as well as the remains of a wooden canoe provide evidence that suggests the Yaghan people of Tierra del Fuego may have made the journey to the islands. It is not known if these are evidence of one-way journeys, but there is no known evidence of pre-Columbian buildings or structures. However, it remains uncertain whether the discovery predates arrival of Europeans because of the presence of a Patagonian Missionary Society mission station on Keppel Island, founded in 1856. Yahgan Indians were at this station from 1856 to 1898 and may be the source of the discovered artifacts. The presence of the Warrah has often been cited as evidence of pre-European occupation of the islands. However, in 2009, this hypothesis was disproved when DNA analysis identified the Falkland Island wolf's closest living relative as the Maned Wolf (Chrysocyon brachyurus) - an unusually long-legged, fox-like South American canid, from which it separated about 6.7 million years ago. It would seem that the lineages of the Maned Wolf and the Falkland Islands Wolf separated in North America; canids did not appear in South America until roughly 3 million years ago in a paleozoogeographical event called the Great American Biotic Interchange, in which the continents of North and South America were newly connected by the formation of the Isthmus of Panama. This means it is likely that the Warrah arrived in th

Congress, U: Small Business Concerns With the Section 800 Pa