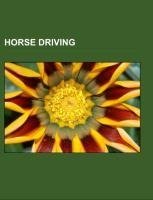 Source: Wikipedia. Pages: 37. Chapters: Blinders, Carlo Mascheroni, Carriage, Carriage driving, Cart, Clay Trotting Horses, Combined driving, Crotal bell, Croydon (carriage), Draft horse showing, Driving (horse), Driving club, FEI World Equestrian Games, Fine harness, Gee and haw, Horse-drawn vehicle, Kibitka, Mossman Collection, NIC Zuidlaren, Roadster (horse), Scurry Driving, Sulky, Tandem, Troika (driving), Whippletree (mechanism). Excerpt: A carriage is a wheeled vehicle for people, usually horse-drawn; litters (palanquins) and sedan chairs are excluded, since they are wheelless vehicles. The carriage is especially designed for private passenger use and for comfort or elegance, though some are also used to transport goods. It may be light, smart and fast or heavy, large and comfortable. Carriages normally have suspension using leaf springs, elliptical springs (in the 19th century) or leather strapping. A public passenger vehicle would not usually be called a carriage - terms for such include stagecoach, charabanc and omnibus. Working vehicles such as the (four-wheeled) wagon and (two-wheeled) cart share important parts of the history of the carriage, as is the fast (two-wheeled) chariot. Coach of an imperial family, ca. 1870The word carriage (abbreviated carr or cge) is from Old Northern French cariage, to carry in a vehicle. The word car, then meaning a kind of two-wheeled cart for goods, also came from Old Northern French about the beginning of the 14th century; it was also used for railway carriages, and was extended to cover automobile around the end of the nineteenth century, when early models were called horseless carriages. A carriage is sometimes called a team, as in "horse and team". A carriage with its horse is a rig. An elegant horse-drawn carriage with its retinue of servants is an equipage. A carriage together with the horses, harness and attendants is a turnout or setout. A procession of carriages is a cavalcade. A Gala Coupé, 18th century; Royal Museums of Art and History, Brussels Some horsecarts found in Celtic graves show hints that their platforms were suspended elastically. Four wheeled wagons were used in prehistoric Europe, and their form known from excavations suggests that the basic construction techniques of wheel and undercarriage (that survived until the age of the motor car) were established then. The earliest recorded sort of carriage was the chariot in Mesopotamia as earl